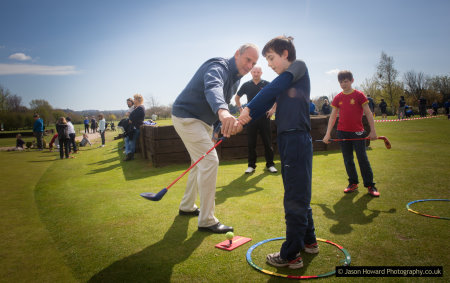 Five time British Olympic Rowing Legend, Sir Steve Redgrave, was guest of honour at an informative and inspirational day at Pryors Hayes Golf Club near Chester at the beginning of this month.

More than 100 business and school leaders from Cheshire West and Chester (CWAC) attended the day to hear the five time gold medallist explain how plans for the proposed new Chester Student Village – which will become home to The Redgrave Institute – will deliver sporting and economic benefits for the community and young people who choose Chester for their studies.

Also present on the day were 100 school children from 10 different schools accompanied by their teachers and head-teachers. Mentored by experienced coaches, the children were taking part in an exciting new golf-tuition and equipment concept – SNAG (Starting New At Golf) – which is designed to make the sport more accessible to many more young people.

Encouraging greater participation in sport and enabling access to like-minded sports clubs and facilities are central to the philosophy of The Redgrave Institute – Sir Steve has already been directly involved in inspiring more sports and activities in Cheshire Schools. His team are keen to show how, with the right programmes and partnerships, young people can participate in more sports and enjoy the clear benefit to their health and wellbeing.

Sir Steve gave the children a stirring insight into his own spectacular sporting achievements. From a keen interest in other sports, athletics and football, his life took a turn towards sporting legend when his English teacher urged him to join the rowing team because of his large hands and large feet!

After a day learning golf through SNAG, the children were excited to get to shake hands with Sir Steve, picking up a signed certificate, a fantastic SNAG golf goody bag and a ‘team’ photo which they will now be able cherish for the rest of their lives.

Nowadays Sir Steve is a keen golfer and he showed this ability a little later in the day by joining some (equally excited) grown-ups for a ‘nearest the pin’ chipping competition for a donation to Macmillan Cancer Support.

At the end of a beautiful day a true legend of British sport had visited Pryors Hayes Golf Club in Chester and an appreciative gathering of people, of all ages, had begun to dream about what they also might still achieve……

Martin Redrup proprietor of Pryors Hayes Golf Club expressed his pride: “It was such an honour to welcome somebody of Sir Steve Redgrave’s standing to Pryors Hayes. I was really impressed by how natural he is with people from every kind of circumstance. At Pryors Hayes we encourage people of all ages, genders and background into golf – so people like Sir Steve, his team at The Redgrave Institute and the tuition and equipment developed by SNAG – which drives more participation, healthier lifestyles and interest for teaching professionals in education, and in sport will always get our support.”

Michael Breen of The Redgrave Institute added: “Sir Steve is passionately committed to helping promote opportunities which get young people involved in all kinds of sports, health and fitness activities. The day illustrated the whole reasoning behind The Redgrave Institute in that it will provide a joined up model to sport provision. In golf as an example we’ll partner with visionary golf clubs, like Pryors Hayes, developing initiatives which make a real difference to schools – starting with fun teaching equipment and programmes of tuition, through SNAG, followed by on-going coaching and full progress to the sport itself and all that facilitates.”

Guy Higton Director of i-KAN GC Ltd (Distributor of SNAG Equipment) stated: “It was great to have the SNAG team involved in such a fantastic day along with Pryors Hayes and the Steve Redgrave Institute. Seeing how much enjoyment was had, not just by the children but also by Sir Steve, really brings home how important sports participation is no matter your age. The whole day and initiative really fits with our company’s vision of providing easy access to sport and increasing participation whilst having fun.”