Scheme to get more women golfing is set to grow

A scheme to encourage new women golfers to play more often and have fun on the course has been such a success that it is set to grow.

The Academy Away Days ran in three counties this season and attracted over 300 players, bringing them together for on-course outings to grow their confidence and to make new friends. 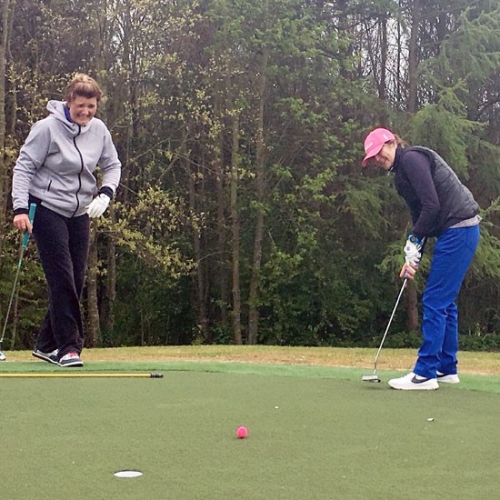 Next year the scheme will run again in Hertfordshire, Durham and Cheshire and will also be extended to five new counties: Northumberland, Worcestershire, Suffolk, Devon and Hampshire.

“It’s a great opportunity to learn to play with others who are at the same level,” said one of the players. “I was a little nervous about the overall day but the experience was good,” added another. “It’s given me the confidence to play on the course and improve,” said a third.

The Academy Away Days have been developed by England Golf as part of its commitment to growing the women and girls’ game. Currently only 15 per cent of club members are women and just one per cent are girls, but research shows there’s a huge appetite for playing the sport.

The scheme was pioneered in Hertfordshire where clubs realised they needed to support and retain women who had taken Get into golf beginner courses.

Outings are organised on par three and short courses and the players use a novel scoring system which focusses on rules and etiquette rather than the number of strokes taken.

So, over nine holes, the women complete a series of challenges such as successfully hitting the green in one shot, raking the bunker correctly and shaking hands on the final green when they had completed their game. Everyone tees off at the same time so there’s lots of opportunity to socialise afterwards and enjoy a glass of fizz.

The success of the scheme is highlighted by the results of a survey of women who took part this summer, which indicated that almost 60% have taken out some form of membership.

Lauren Spray, England Golf’s Women and Girls’ Participation Manager, commented: “The Academy Away Days have proved a great way for women to make friends, to build their confidence and to have fun while they improve their skills and keep playing golf.

“The feedback from the players has been so positive and I’m looking forward to seeing even greater success as it grows into the new counties.”

England Golf has also piloted the Sunday Slam this year for women aged 18-35 and the concept will be further tested next season.

The Sunday Slam offered a series of monthly stablefords to women who may only be able to play at the weekend and want to get together with other women of a similar age for competitive yet social golf.

Events were held at Breadsall Priory in Derbyshire, Belton Park in Lincolnshire, Radcliffe on Trent in Nottinghamshire and The Leicestershire in Leicestershire.