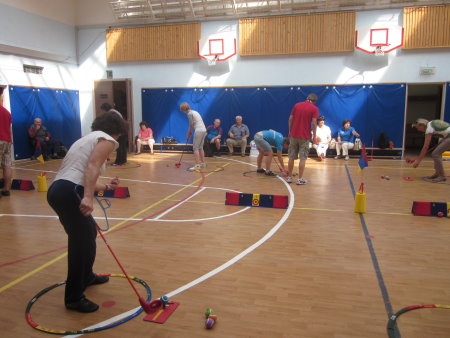 Continuing the success of SNAG (Staring New at Golf) development within Europe and beyond. Golf in Russia is seeing an increase in its junior development. Russia is still very much under developed with currently no more than six thousand registered golfers, but the speed of development is picking up pace thanks to INTERGOLF. INTERGOLF was founded in 2010. It is currently the exclusive distributor of SNAG in Russia and also official partner of the Russian Golf Association for children’s golf development in Russia.

INTERGOLF aims at making golf popular, making it more and more available for public. Head of INTERGOLF Marina Valevskaya said:  “We believe SNAG to be the best golf training methods. We`re absolutely positive SNAG will make golf playing most exciting for large amount of children and adults. We`re planning to expand this project to other cities and regions.”

INTERGOLF believe that with the help of the SNAG programmes, golf in Russia will see a big growth in popularity.

INTERGOLF has held quite a number of golf SNAG presentations and demonstration classes this year at local schools and children’s sport centres. They have an agreement with a school in Moscow to use their sports facilities as sports ground for the use of SNAG and the programmes.

As of February 2013 The Ministry of education and science of Russia recommended golf to be trialled in comprehensive schools in Russia. About 20 schools in Moscow region have already started working with SNAG programmes.

On Saturday 18th May, INTERGOLF held a SNAG demonstration lesson for the Department of Education of Moscow and for 200 schools.  This lesson was attended by teachers of physical culture of the city of Moscow, some of whom have already expressed great interest in the SNAG program. Project manager Daniil said: “The great joy and interest we saw in the eyes of the children and their teachers at every event is very inspiring.  We think that this project will attract more and more schools”.

In September this year, INTERGOLF plan to hold the first SNAG golf Open Championship of Moscow between 20 schools of Moscow region. This event will take place with the support of the Russian Golf Association.

On 29 – 31 May INTERGOLF took part in the international forum of the Commonwealth of Independent States entitled “Health – the basis of the prosperity of the Commonwealth” which was organised by All-Russian public organization “League of Health Nation” and The Ministry for sport of the Russian Federation, INTERGOLF presented  SNAG, which acquired public acclaim and won a lot of supporters from the event.

INTERGOLF received a lot of interest for future SNAG development work in other regions of Russia so watch this space for further SNAG progress within Russia.