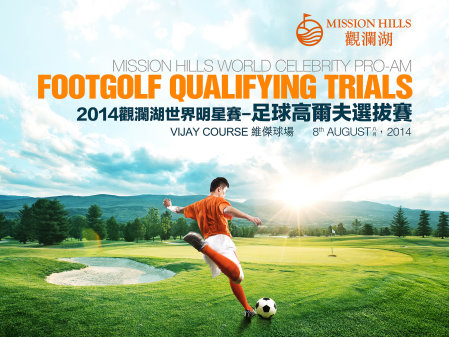 It is a sport that is spreading across Europe and the Americas, superstar Wayne Rooney plays it in a popular TV ad and it even has its own World Cup.

Now Footgolf – combining football and golf in one fun-filled and novel pastime – is coming to China.

Mission Hills will add another chapter to its pioneering history when it stages the country’s first Footgolf tournament on 8 August.

The Mission Hills World Celebrity Pro-Am Footgolf Qualifying Trials, to be held on the Vijay Course at Mission Hills Shenzhen, will be a nine-hole challenge for teams of two, comprising one adult and one junior.

And the prize for the winning team will be to play alongside global superstars from entertainment and sport when Footgolf is incorporated into the Mission Hills World Celebrity Pro-Am this October.

“Mission Hills staged the first World Cup of Golf in 1995, hosted Tiger Woods’ first visit to China in 2001 and was the first – and so far only – leisure resort to be named a 5A Level Tourist Attraction by China’s National Tourism Administration,” said Mission Hills Group Vice Chairman Mr. Tenniel Chu.

“Therefore, it is appropriate that we should be leading the way in Footgolf. This inaugural tournament, with a fabulous prize awaiting the winners, is just the start of a commitment to the sport that will see us launch a domestic league and stage international events.”

Footgolf has the same basic rules and concepts as golf, except players kick a football rather than use traditional clubs and golf balls.

The Mission Hills World Celebrity Pro-Am will be held from 24-26 October at the fully-integrated Mission Hills Haikou Resort on the tropical island of Hainan.