As the 2017 golf ‘season’ draws to a close, clubs across the Scottish  Highlands & Islands are reflecting on another successful year of ClubGolf coaching activity.

The national junior programme simply goes from strength to strength, often in some of the remotest parts of the country. Indeed, ClubGolf coaching participation figures for 2017 across the North (Highland, Orkney, Shetland, Western Isles & Moray) have increased by 10% since the 2016 returns from clubs. 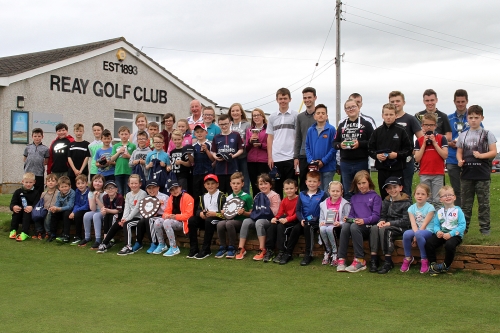 Girls’ participation across the North is also slightly above the national trend with a 25% participation level, but in Shetland and Moray the clubs have recorded over 30% of girls participating in ClubGolf coaching programmes.

The picture is notably bright at Whalsay Golf Club, Britain’s most northerly 18-hole golf course. Whalsay juniors (top of the page) have increased their on-course playing time by 120% with structured competitions for 3 holes, 6 holes, 9 holes and 18 holes.

“Whalsay is over 330 miles from St Andrews, and closer to Bergen in Norway at 220 miles, but the Scottish Golf ClubGolf programme is vibrant and all-year round with an indoor golf facility through the Shetland Recreational Trust at Whalsay Leisure Centre,” outlines Willie MacKay, Scottish Golf’s Regional Club Development Officer for the North.

Elsewhere in the North, golf is proving to be a popular sport with school-age youngsters at Rothes GC. The club’s junior section was founded just three years ago, supported by the ClubGolf scheme.

The club’s junior convenor, Neal Anderson, says the project has taken off with the help of sponsorship from local businesses. “We have managed to develop the junior section in all areas,” said Anderson. “The team of volunteers involved with the junior section remain passionate and enthusiastic, but more importantly the kids are enjoying their golf and have more opportunities than ever to participate in the sport.”

The club were boosted this Year with new practice nets gained as a direct result of a successful application by the junior section to the Lottery Awards for All project. Anderson added: “The nets have been a great addition to the club and of huge benefit to the kids as they look to adopt proper practice sessions and warm up drills.”

Recent coaching figures are notable also. Golf Clubs in Moray achieved an outstanding return for their Level 3 coach participation where coaching groups work with PGA Professionals by increasing the retention of children in golf by over 150% at this level.

Further afield, the Reay Junior Open is consistently a large event and a great competition. The current Captain, Grant Coghill, has, according to Willie, “the organisation of the event down to a fine art and this is a massive support to PGA Level 2 Coach, Evan Sutherland and his group of Level 1 coaches and volunteers.”

Orkney and Stromness Golf Clubs are also enjoying success. Douglas Slater, junior convener of Stromness, was honoured at this year’s Scottish Golf Awards. He was named as the Volunteer of the Year for his dedicated work in improving not only junior golf in Stromness, but also Orkney as a whole.

A winter coaching programme, based at Royal Dornoch, is helping juniors develop, via monthly trips by ferry from Stromness. Orkney also welcomed 37 junior golfers to their recent junior championship. With nearly 40 children entering the end of season ClubGolf competition at Forres GC, covering disciplines the children learned throughout the year, ClubGolf is certainly continuing to drive children into the game in the north of the country.