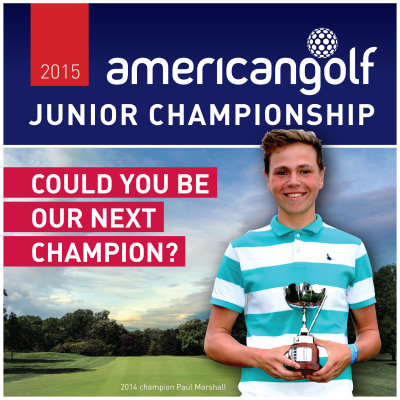 After the success of last year’s Junior event, American Golf – in association with PING – is to roll out its Junior Championship across the UK this summer with all proceeds being donated to The Golf Foundation.

There will be 6 regional qualifying events across the country in July and August, with the Grand Final taking place on 26th August at PING’s Gainsborough headquarters.  The event is open to anyone aged under 18 as of the 1st January 2015. There will be several prize categories from scratch comp to up to handicaps of 54 for both boys and girls.

“We were really inspired by the golfers we met at last year’s event,” comments Daniel Gathercole, Head of Marketing at American Golf. “They were incredibly passionate about their game but they also reminded us how much fun golf can be.  We’re excited to widen the reach of the event and give more young golfers the chance to play some great courses.”

2014 Champion Paul Marshall will be back to defend his title having felt the benefits of last year’s experience. “Since last year’s event I have felt much more comfortable playing golf. I feel much more confident under pressure situations, such as matches and competitions. My game as a whole has become more consistent, and in particular my long-iron play has improved.”

Juniors wishing to enter can apply online at www.americangolf.co.uk/events Rather than pay an entry fee, they will be asked to make a £5 donation to The Golf Foundation via a dedicated Just Giving page, a donation that will help bring the next generation of golfers into the game.

PING will support the Junior Championship again this year and will be looking for its Star of the Future, as Tim Jenkins, Marketing Manager at Ping explains, “The Junior event is great as it attracts a wide range of ages and abilities.  We created the Star of the Future award to recognise those golfers who bring a great attitude, support other players around them and display the spirit of the game of golf.”

Venues for regional qualifiers are: