VisitScotland tees up return to the Scottish Golf Show 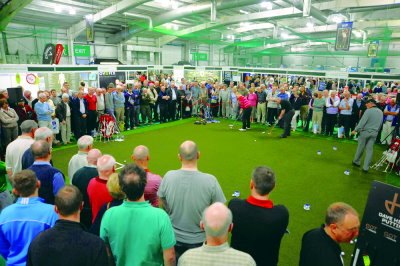 The organisers of the 2013 Scottish Golf Show have confirmed that VisitScotland – the country’s national tourism organisation – will sponsor the three-day, annual show for an eighth consecutive year.

This announcement follows the earlier confirmation that the 2013 edition of the show will take place at the SECC in Glasgow from 26-28 March, having been staged last year at the Royal Highland Centre in Ingliston, Edinburgh.

The Scottish Golf Show and VisitScotland have teamed-up to great effect since the show launched in 2006 and show organiser Tom Lovering is confident that this collaborative success will continue next year.

“VisitScotland has given its support to the Scottish Golf Show from the very beginning and we are very grateful to them for that,” said Lovering. “I look forward to working with all of our partners at the organisation again in 2013 when the show makes its return to Glasgow.

“Today’s announcement reinforces my belief that next year’s show is shaping up to be, without doubt, the best yet and will tee off what is sure to be another memorable season here in the ‘Home of Golf’.”

Dr Mike Cantlay, chairman of VisitScotland, added: “The Scottish Golf Show has been a huge success and, in our opinion, helps to profile everything that is great about the game here in the country of its birth.

“In 2014, Scotland welcomes the world when we host the Ryder Cup, Commonwealth Games and Homecoming. On top of that there is a lot to be excited about in terms of golf in Scotland over the next few years. In 2013, we will host four full European Tour events, the most of any country in Europe, including the Open Championship at Muirfield while we also welcome the RICOH Women’s British Open back to St Andrews. This is in addition to Seniors, Ladies and Challenge Tour events – wouldn’t it be great if everyone in Scotland could pick up a golf club in Scotland, inspired by these amazing events.

“The Scottish Golf Show in March 2013 will be a great way to kick off this unprecedented era of golf events in Scotland.”