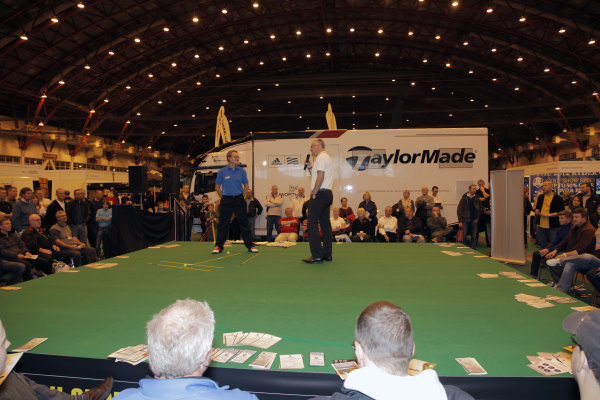 Whilst many amateur golfers in the UK are considering packing their clubs away for the winter, those at the London Golf Show (in association with talkSPORT) last weekend demonstrated not even the November frost could keep them preparing for the 2013 season!

With many reasons to visit this year’s London Golf Show, the public once again turned out in droves to support the show and its 100+ brands. The organisers, exhibitors and leading brands in the industry all reported a successful show with more brands, more deals and more interaction than ever before and the public also agreed that the show was a hit.

This year’s show provided a truly interactive experience for golfers of all ages with informed expert advice advice, PGA tuition, a huge indoor driving range, custom-fitting, club testing, a custom build truck, simulators and the latest golf gadgets. There were more than 50 professionals at the show on hand to give instruction, coaching and advice to the public who attended and they were supported by some of the most well known golf brands including TaylorMade, Callaway, Titleist, Yonex, Cobra, Mizuno, Nike, Cleveland and Wilson, and retail partner the Internet Golf Store. 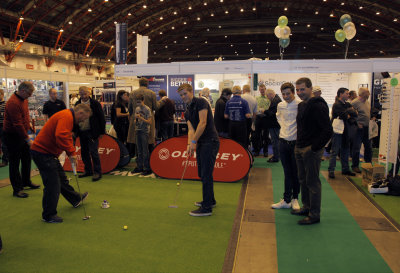 The show got off to a glamorous start with Golfer, Model & TV presenter Sophie Horn opening the show with the traditional ‘banging of the driver’ on the front door – much to the delight of the queuing public.

Once under way, the core focus for the show was the main stage, where Tony Westwood compered the weekend, introducing new brands and products, as well as specialist coaches giving advice on different aspects of the game including England coach Gary Smith, European Tour Putting coach Andy Gorman and Peter Hudson from the World Golf Teacher’s Federation. However, it was clear the stars of the show were the Golf Trick Shot Boys, Geoff Swain and Kevin Carpenter, who wowed audiences with their tricks and brought the crowds to their feet with their set-piece wizardry.

The loudest cheers in the show were heard on the competition features, where visitors enjoyed hours of fun. Non-stop queues surrounded the Lexus Hole in One competition, and the adrenaline pumped at the end of each day as five visitors attempted to win a magnificent Lexus GS 250 F Sport.

The Las Vegas Challenge Long Putt brought massive applause as near-impossible putts were sunk and one lucky winner walked off with a once in a lifetime trip to Vegas.

TrueStrike’s TrueTee Rapid Fire Challenge was an instant hit as golfers attempted to pound more balls in a minute off the world’s fastest automated teeing system than anyone else, and the Urban Crazy Golf kept both adults and juniors relaxed and amused on their devilish holes.

This year the show also presented much more for the kids, with JOLF, Factory Eleven and The London Golf Academy, all encouraging the next generation of golfers to enjoy the sport.

However, the biggest cheer came from the exhibitors, who all agreed this year’s show had a fresh look, more to do, and a fantastic attendance from the capital’s golf lovers…

Adam Bullock – Managing Director of talkSPORT hailed the show a “superb event” he went on to say: “We are very pleased to be associated with such an established brand as the London Golf Show. We have thoroughly enjoyed being a supporter of the show and we are looking forward to discussing how we can grow our partnership with the Golf Show Group in the future. It was so good to see so many golf fans enjoying their sport and we look forward to build our involvement in the show and across all our media platforms in 2013 and beyond”

Terry Sims – the Internet Golf Store reported record sales, up 13.5% on last year’s best ever, saying: “We had our biggest ever space in the show, and achieved more sales than ever before thanks to support from the industry both inside and outside the store.”

Jo Oates – Foxhills enthused: “This was our first year at the show and we were so pleased. The number of people, and amount of enquiries and interest in the Club was phenomenal – we’ll be back!”

Jon Gibbons – Purestrike said: “It was great to see some old customers and plenty of new ones at the London Golf show. Thanks to the organisers for another great event.”

Ian Mullins – TheSocialGolfer.com said: “Wow, what a great show! We couldn’t have had a better response from the public. Busy show, great features and well organised. We are already looking forward to next year!”

Damian Benstead – Managing Director of the Golf Show Group said: “We were thrilled with the turn out and pleased that so many exhibitors and visitors had a fantastic time. There was a great buzz around the show all weekend; Earls Court is a great location. It was wonderful to work with talkSPORT for the first time, and they made a big difference to the show, as it helped us to reach so many more golfers. We must also thank all our exhibitors – so far the feedback has been nothing but positive – and we are now getting excited about taking this success to the north for the first time, with the Manchester Golf Show in April 2012!”

Golf management and marketing company Troon has opened a new corporate office in Chicago and created two new staff roles to accommodate growth interests and opportunities in the region.

Wales Golf has postponed the 2021 Ladies Open Strokeplay, which was due to be held at Newport Golf Club from April 30- May 2, to a new date later in the year when it hopes it will be able to go ahead without restrictions.