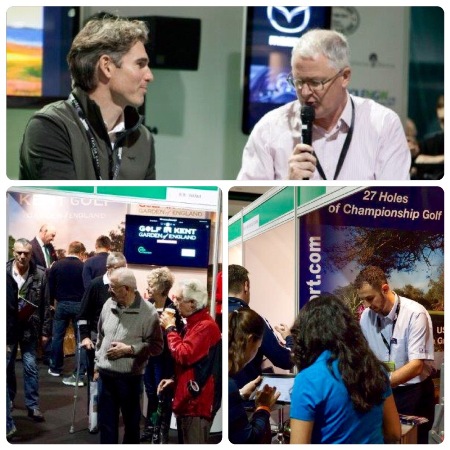 Exhibitors at last weekend’s London Golf Show – at Glow, Bluewater for the first time – were full of praise for this year’s event and those attending the first ever golf tourism section each reported hundreds of new contacts for their clubs, hotels, resorts and destinations.

The Golf Tourism Show, which saw exhibitors from all over the world come to meet golfers from the UK proved to be a great addition to the show in its launch year. Stand-holders were particularly pleased with the quality of the visitors who showed great interest and knowledge of their destinations.

Exhibitors at the show which took place from 14-16 November, were also given the opportunity to present their destinations on the Golf Tourism Stage which was compered by Ross Biddiscombe, author of Ryder Cup Revealed: Tales of the Unexpected. Biddiscombe interviewed tourism exhibitors on each of the three days to offer them an additional opportunity to be seen and heard.

Commenting on the success of the show, Dominic McMullan, Marketing Manager of the Golf Show Group said: “The Golf Tourism Show has been a year in the planning since our first visit to IGTM as members of IAGTO, which gave us the feedback from the tourism trade to produce a show dedicated to golfing holidays in the UK and overseas.

“Response from exhibitors, even halfway through the first day was fantastic and the theme continued throughout the three days of the show.

Exhibitors who commented on their experiences of The Golf Tourism Show, include Kate Marechal, Chateau de Raray, France, who said: The London Golf Tourism Show 2014 was a brilliant success. We had many visitors to our stand who expressed great interest in our destination which was what the show was all about.”

“It was a very busy show for us,” said Alexandre Barroso, Vidago Palace, Portugal. “I strongly believe that Vidago Palace was able to pass the message about the good venue that we represent. During the Show we made contact with more than 500 people. I will be back next year.”

Nicole & Hans van Rooden, Holland Golf Travel, said: “The venue was super, the stage with Ross (Biddiscombe) was great. We were amazed at the golf handicaps of the visitors. We’ve got about 400 contacts and the average handicap was around 15!!! Amazing!”

“The stage presentations by Ross (Biddiscombe) were great as was the profile of the visitors to the show who were nearly all club members and keen players, we made lots of contacts,” concluded Herve Declety, Open Golf Club. “The show was marketed well and visitors could park for free which is great.”

The Golf Show Group also operate and manage the Manchester Golf Show which will be held in the Spring of 2015, dates and venue details to be announced soon.