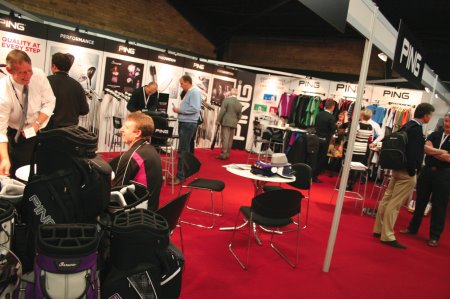 Lawrie, who played a pivotal role in the victorious European Ryder Cup side at Medinah Country Club, Chicago, joined a record attendance of 1,282 PGA Professionals at the Harrogate International Centre.

The 1999 Open Champion, who is opening the Paul Lawrie Golf Centre, in Aberdeen, spent two days at the show, talking to delegates and posing for pictures with The Ryder Cup trophy.

“I am proud to be a PGA Professional and it has been a pleasure to attend The Golf Show,” said Lawrie. “The welcome I’ve received from my fellow PGA Professionals, exhibitors and the event organisers has been overwhelming.

“This is a very exciting time for me personally with the result at Medinah, which was an amazing experience – I’m also very excited about the future of my Foundation. As PGA Professionals we pass on our expertise to help introduce and develop junior golfers and I’m committed to playing my part in that process.”

A sell-out audience of more than 300 PGA Professionalsattended the new Teaching & Coaching Conference, staged on the final day of the show, to see David Leadbetter and Karl Morris, Chief Executive of the Lee Westwood Golf School.

David Leadbetter said: “One of the many things we’re good at in this profession is sharing our knowledge, and that’s what we’ve been doing today.

“I hope the guys have left here thinking there is more than one way to do things. When you’re on your own at the club and teaching for many hours, you can lose sight of the fact that it’s a big world and there’s a lot of knowledge to be gained. So hopefully I’ve got these guys thinking and changing the paradigm, the world has progressed and there’s a lot of wonderful information out there.”

David Leadbetter added: “I’ve been extremely impressed with The Golf Show as a whole, I had no idea it was so big and there was so much here. A PGA Professional’s living is made from coaching and selling merchandise, and I would advise any golf pro to attend this show as they’ll learn a lot about every aspect of their business and be truly inspired.”

Initial indications from suppliers show an increased level of business conducted over the three days of the show, with many brands reporting high levels of sales. TaylorMade-adidas Golf Chief Executive EMEA and Pacific Ben Sharpe revealed it was the company’s most successful year at the event.

The panel discussed subjects including how on-course retailers can evolve to compete with the growth of online retailing, the quick cycle of golf equipment and ways in which PGA Professionals can promote themselves to clubs and consumers.

John Davis, Golf Show Event Manager, said: “It has undoubtedly been an extremely tough year for the golf industry, perhaps one of the hardest ever with the wet summer, Olympics and European Championships, so to see the whole industry come out so strongly and support what is now without doubt Europe’s largest and best quality golf trade show has been phenomenal.

“Suppliers increased their stand sizes and have been extremely creative while the increased attendance and presence of high profile PGA Professionals such as Paul Lawrie and David Leadbetter indicates how highly the show is now regarded by the whole industry.”