A Ryder Cup Heritage Exhibition, illustrating the rich history of one of the most compelling events in world sport, is now on display in Newport, South Wales until 19 August 2010, as the build-up to the 38th Ryder Cup gathers pace.

The Ryder Cup began in 1927 as a match between the professionals of Great Britain and the United States, since then it has evolved to include the finest golfers from across Europe and the USA. The Heritage Exhibition will tell the story of the event from its humble beginnings to the present day, when it will arrive at Newport’s Celtic Manor Resort from 1-3 October. 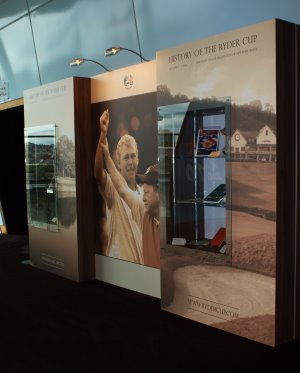 The fascinating and unique collection of Ryder Cup memorabilia, including signed programmes, team gifts and golf equipment is on display at the Riverfront Theatre and Arts Centre in Newport’s city centre.

Councillor Matthew Evans, Leader of Newport City Council, said: “This is a great opportunity for people to get up close and personal with The Ryder Cup. The history of the event and how it made its way to Newport will make for a fascinating exhibition that is part of the Newport Festival taking place across the city in celebration of 2010.”

The exhibition will then move to Cardiff to go on display at Amgueddfa Cymru – National Museum Cardiff from August 22 to September 23.

The exhibition will ultimately arrive at the Celtic Manor Resort on 27 September, prior to the start of the Ryder Cup. The exhibition will be in the tented village throughout the event and available for the thousands of spectators from around the world who will flock to see golf’s end of season showpiece.

Rob Holt, Chief Executive of Ryder Cup Wales, added: “There will be many opportunities for visitors to the area to share in the experience of the 2010 Ryder Cup, one of which will be a chance to go and see the fascinating display of Ryder Cup memorabilia. In order to get a great taste of the event from years gone by, I urge everyone to make time to go along and take a look.”

Sun Mountain says it has succeeded in raising the bar in golf bag design with the introduction of its striking MID-STRIPE stand bag from its new high-end SONNENALP line offering stylish old school looks with a sleek, modern twist.

Abacus Sportwear’s latest apparel collection boasts a bespoke range of high-performance outerwear that is designed to protect golfers from the worst of weather conditions, while enabling them to play their best.