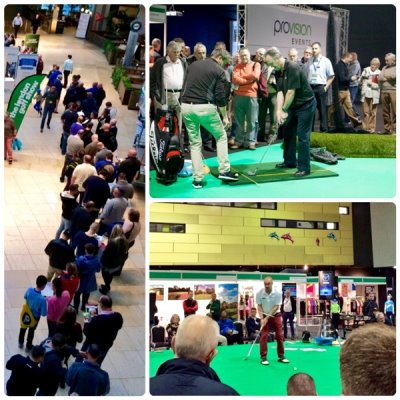 The Organisers of the London Golf Show, which was held at Glow, BLUEWATER, from 14-16 November, report increased visitor numbers, records for retail spend and golf lessons delivered at its leading UK golf exhibition.

Official visitor numbers were 12,931 over three days of the show which is 9% up on the previous year’s show at Earls Court. The Golf Show Group credit the increase in numbers to a series of key drivers, a change of venue with free parking, an upturn in the economy, an increased number of exhibitors with a diverse range of products, and an increasingly focussed marketing campaign.

MD of the Golf Show Group, Damian Benstead said: “This year’s London Golf Show has been a great success for us and for our exhibitors who have reported great feedback about their experiences.

“Our new venue Bluewater proved to be a great hit with visitors too, with 12,931 choosing to come to the show and park for free.”

“Prostate Cancer UK, the show’s official charity partner reported great feedback from visitors, delivering online support and advice from their stand, they also benefited from more than £4,500 in donations from the Long Putt, Long Drive, Crazy Golf and the Hole in One.

“Massive thanks go out to all the exhibitors that supported us and all the visitors who came to the show, we look forward to welcoming everyone again in 2015.”

The London Golf Show also featured the Golf Tourism Show, which saw exhibitors from all over the world come to meet golfers from the UK. This proved to be a great addition and is expected to form an increasingly important part of the exhibition in the future.

The Golf Show Group also operate and manage the Manchester Golf Show which will be held in the Spring of 2015, dates and venue details to be announced soon.