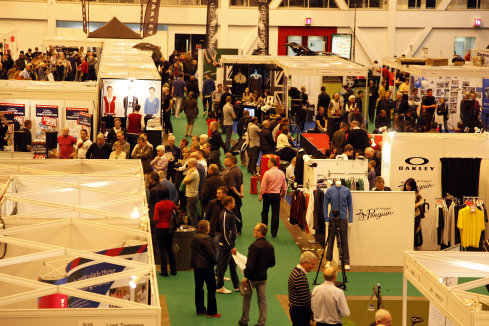 It was months in the planning, all the details had been thrashed out, the exhibitors were all in place and they are waiting for the crowds at Earls Court on the weekend of 11th-13th November….and they came!

There were more than 50 PGA Pros at the show on hand to give instruction, coaching and advice to the public who attended and these were supported by some of the most well known golf brands including TaylorMade, Callaway, Mizuno, Wilson and Yonex and the retail partner the Internet Golf Store. More than 100 brands were exhibited at the show, and unofficial numbers were estimated at 14k visitors.

This year’s show saw many new exhibitors including Urban18, Where Eagles Dare, Fedaboa, City Golf, Lexus, TheSocialGolfer.com and the show was also supported by global media brands such as Bloomberg / Businessweek, as well as City AM & Golf News.

One of the main focuses for the show was the main stage, where Tony Westwood compered the weekend, with interviews and discussions with Ian Carter – BBC Golf Correspondent, as well as Biomechanists, Mind Coaches, Strength & Conditioning experts, former British Ladies Open Champion Vivienne Saunders, and OnlineGolfCoach – Dean Halford.

And of course the star of the show was Dave Edwards who kept both young and old entertained with his Trick Shot display and his impressions of amongst others, Juan Miguel Jimenez and Ian Poulter!

Prizes galore were given out during the show, with the Golf Show Lottery in full swing and many brands brought exclusive bespoke offers to the show.

Marketing Director Ian Mullins said: “We were thrilled with the turn out we got to the show, these are tough times for everyone but the public really came out to support us, Pre-show ticket sales were double that of the last London Golf Show and we have to say thank you for all the support we have received from the media for helping to make this year a success!”

Damian Benstead- Managing Director of the Golf Show Group went on to say:  “Clearly, our decision to move the venue to Earls Court made a great difference to the show, as it helped us to attract new visitors from the west side of London. However, we think the decision to move the show to November also helped. We must thank all our exhibitors – so far the feedback has been nothing but positive – and we are now looking to build on this success at the National Show at the NEC in April