NGCOA to Honour Jack Nicklaus with Award of Merit

World Golf Hall of Famer and globally renowned course designer Jack Nicklaus will be honoured as the recipient of the 2014 NGCOA Award of Merit at the Association’s Annual Conference in Orlando, Fla. The Award of Merit is the NGCOA’s longest-running award and is designated for long-term and significant contributions to the game of golf.

“Jack Nicklaus has made an unparalleled impact on the game of golf and we are privileged to bestow our Award of Merit on the ‘Golden Bear’ this year,” said Mike Hughes, CEO of the NGCOA. “While his incredible playing career has set a standard for generations, his accomplishments as a course designer, businessman, philanthropist and NGCOA member truly make him deserving of our highest honour.”

Over a championship career that spanned five decades, Nicklaus won 120 professional tournaments worldwide, including a record 18 major championship titles. One of only five golfers to win all four of golf’s modern majors-and the only one to do so on the senior circuit-he also played on six Ryder Cup teams, captained two others, and served as U.S. captain for four Presidents Cup teams.

His legacy on the course is being rivalled by the lasting mark he is currently leaving off the course, as well. The Golden Bear’s thriving business, Nicklaus Design, has created 380 courses in 36 countries and 39 states, and has had no fewer than 75 courses appear in various national and international Top-100 lists. Nicklaus himself has been involved in the design of close to 290 of the firm’s courses, no fewer than 100 of which have hosted a combined total of over 750 professional tournaments or national amateur championships.

His Ohio home club of Muirfield Village Golf Club-the recipient of the 2008 NGCOA Jemsek Award for Golf Course Excellence-just became the first in history to have hosted the Ryder Cup, Solheim Cup and now Presidents Cup. That began a run of three consecutive years in which Nicklaus courses will host the world’s most prestigious international team event, with the 2014 Ryder Cup going to Gleneagles in Scotland and the 2015 Presidents Cup going to the Jack Nicklaus Golf Club Korea in New Songdo City.

Jack is also Co-Chairman of the privately held Nicklaus Companies, which for more than 40 years has provided services such as golf-course design, development of golf and real estate communities, and marketing and licensing golf products and services. Nicklaus- branded products have been marketed worldwide since 1962. The Jack Nicklaus- and Golden Bear-branded lifestyle collection of products include: restaurants, beverages, wine, home appliances, flooring, cabinets, apparel, and footwear. In 2007, Nicklaus joined together with a like-minded partner in Howard Milstein, the Chairman of Emigrant Bank and now Co- Chairman of the Nicklaus Companies, to help further the growth of the company and to realize the full potential of the brands and branded businesses.

Jack and his wife Barbara have a long history of involvement in numerous charitable activities, from junior golf to children’s hospitals to several scholarship foundations. Jack and Barbara are the guiding light for the Nicklaus Children’s Health Care Foundation, which supports numerous paediatric health-care services in South Florida, as well as nationally, and has raised over $24 million in just nine years. 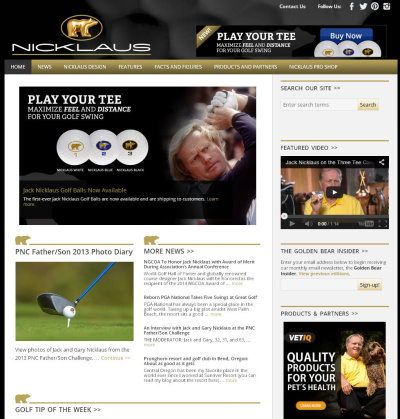 In July 2013, Jack received the Ambassador of Golf Award, presented annually to a person who has fostered the ideals of the game on an international level and whose concern for others extends beyond the golf course.

The association also will recognize winners of the Jemsek Award for Golf Course Excellence; the Don Rossi Award for significant and long-lasting contributions to the NGCOA; the Champion Award for service to course owners at the state level; the Player Development Award for success in attracting new players to the game; and the Paul Porter Award for commitment, service and leadership to a chapter or international affiliate. The winner of the National Course of the Year Award will also be announced during the awards ceremony.

The NGCOA’s Annual Conference is the golf industry’s largest gathering of owners and operators of daily fee, private, resort and municipal courses. The conference, which will ï¿¼be held Feb. 3-6, offers educational and networking opportunities and guest speakers. NGCOA members and non-members can register for the conference at www.ngcoa.org/conference.

The conference occurs in conjunction with the Golf Industry Show, 5-6 February, at the Orange County Convention Centre. The show, which is presented by the NGCOA and GCSAA, showcases the golf industry’s latest products and services throughout an expansive exhibit area and offers a wide range of educational opportunities.