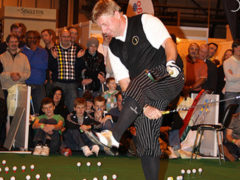 Spring 2011 will see the launch of a landmark new consumer event – the National Golf Show – taking place from 15-17 April – while the London Golf Show moves to a new date in November.

The event is being organised by the Golf Show Group who say that it is a natural progression from the company’s previous successes staging the London Golf Show and the NEC Golf Show.

As the Golf Show Group’s 10th golfing extravaganza approaches – the NEC Golf Show, 26-28 November – the company has been buoyed by a growth in support for the Midlands-based NEC event.

Golf Show Group sales director Damian Benstead explained: “When the London Golf Show launched in 2005 it was hugely popular within the industry as there was nothing else like it in existence. However when we began the NEC Golf Show in 2007 it was almost like creating a competitor for our own event.

“A lot of feedback from visitors and exhibitors has crystallised our belief that the NEC’s central location in the Midlands attracts golfers from across the country and they are a very keen and knowledgeable golfing audience. At the same time we have noticed those companies that gain most from the London Golf Show benefit from the loyal fan base the event has in the south-east.

“With that in mind we are re-positioning the two products and our flagship event will now be at the NEC at the start of the golfing season, with the first National Golf Show. The move to make a National Show at the NEC allows us to create a truly nationwide show, capable of attracting an audience from all corners of the country.

“The NEC Golf Show has always been well supported by the public, and that is something we can build on by making an even bigger show there. With more than 4million golfers in the UK it is high time for an event which can cater for all of their needs on a national level and this is what we’re now providing.”

However this move does not spell the end for the London Golf Show, in fact organisers are confident the event will benefit from the move. It will take place in November, when many brands now launch their new lines, and will still be the only premier golf event in a central London location.

Benstead added: “The London Golf Show will continue to run alongside the National Golf Show and will now be a London-focused end of year event. The changes taking place will reinvigorate an internationally recognised and established show and provide companies with a dynamic platform to showcase their new products to golfers and media in and around the capital.

For more information on the National Golf Show and booking a stand please contact the Golf Show Group on 01732 836100 or email info@golfshowco.com.