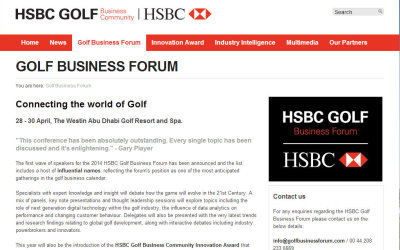 With less than three weeks until the start of the highly anticipated HSBC Golf Business Forum, the conference room at the Westin Abu Dhabi Golf Resort and Spa is filling up.

Golf’s west to east migration and the business case for golf sponsorship are just two topics to feature on the agenda in Abu Dhabi.

Specialists with expert knowledge and insight will discuss and debate amongst other topics; the industry’s most exciting growth markets and what developers, resort owners and business executives really need to know before heading east?

The delegates will also hear from those in charge of global sports marketing budgets and how golf is just one option among many, from Formula One and UEFA Champions League through to the Olympic Games.

Speakers on the above topics will include :

Mike joined the Asian Tour in March, 2012 where he manages the strategic direction of the Tour with the aim of continuing to build and promote the global profile of Asia’s premier professional golf circuit.

Having joined HSBC in 2005, Giles Morgan has been instrumental in developing HSBC’s global sponsorship portfolio in sport and cultural programs around the world and is committed to the development of sport through investment in youth and education in local communities around the world.

Clair Peterson was named Tournament Director for The John Deere Classic just prior to the 2002 PGA TOUR Event. Clair came to the Tournament from Deere & Company where, during his 27-year tenure, he was one of the original group that helped launch John Deere’s Golf & Turf division in 1986, serving as Manager of Advertising and Promotion for 11 years.

As President of Lavasa Corporation Limited (An HCC Group Company) Nathan currently spearheads the development of Lavasa, India’s first planned hill city being built near Pune. Nathan’s in-depth knowledge and experience has seen him play a leading role in the development of tourism, hospitality, leisure, education and corporate verticals at Lavasa.

Dominic Wall has over 27 years’ experience at national and international level sports management which includes 16 years in a number of roles for the Australian Golf Union (AGU) and Golf Australia (GA). He is currently Director Asia-Pacific for The R&A and based in Hong Kong.

Ivan is highly skilled with over 15 years’ experience in the sporting world and has extensive experience in competition and event operations of major international sporting events.

In February of 2014, Spencer assumed the position as Chief Communications Officer with the Asian Golf Industry Federation having previously been a journalist in the UK and Asia.