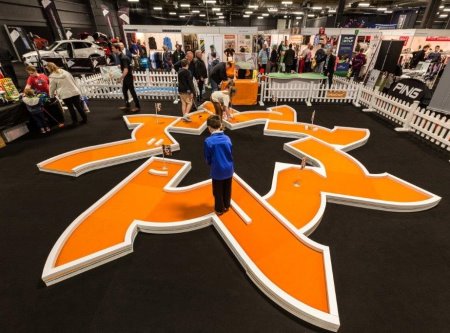 The Manchester Golf Show which was held at EventCity from 25-27 April welcomed golfers from all over the North West and reported a successful show for both exhibitors and visitors alike.

This year’s show was the second Manchester Golf Show, and again proved to be a destination which the golf trade found to be an invaluable environment to meet thousands of golfers face to face each day of the show. With over a hundred brands on show, custom-fitting from the major manufacturers, hundreds of golf lessons completed, trick shot shows, unmissable bargains, and the chance to win a Mazda6 or flights with Monarch, visitors flocked to Manchester’s favourite venue.

The Manchester Golf Show was the platform for the official launches of many of the latest golfing gadgets and accessories in the game including Biion Footwear from Toronto, Californian based companies Game Golf and ZEPP who each demonstrated their products to a tech-savvy audience of golfers and Giannini Putters who generated much excitement over their beautifully crafted wands.

Visitors to the show thoroughly enjoyed their day out with Social Media networks buzzing with activity in the show with over 1,000 visitors tagging @ManGolfShow in tweets from the show to their followers which created a reach of well over 1 million followers.

Fiona Webster from Timperley said: “Had a great time at the Manchester Golf Show. Spent a small fortune on golf clothes but will be looking good for my golfing holiday.”

Dominic McMullan, Sales & Marketing Manager of the Manchester Golf Show said, “To have such an incredible reach through Social Media before, during and after the show has been great for us and for visitors to tag @ManGolfShow over 1,000 times proves what an effective way Social Media is to amplify messages about the show and also to drive more enquiries towards our exhibitors.”

The Golf Show Group Ltd now looks forward to planning, confirming and releasing to the trade all the details of what will be the 10th Anniversary of its flagship exhibition The London Golf Show.