Lumine shines as host of PGAs of Europe training summit 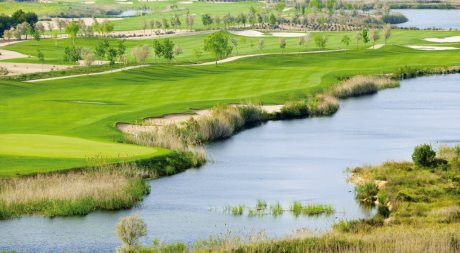 Lumine Golf Club, one of Europe’s most exciting new golfing destinations continued its growing status in European golf last week as it played host to the inaugural PGAs of Europe Coaches Circle and Heads of Training Summit. Situated a mere hour south of Barcelona on the stunning Costa Dorada, Lumine Golf Club was selected to stage these two high-profile events in recognition of its first-class practice facilities and 45-holes of championship golf designed by golfing icon and acclaimed architect, Greg Norman as well as the fantastic accommodation offering in the surrounding region, including the Gran Palas Hotel where the conference was held.

The week kicked-off on Monday with the inaugural Coaches Circle, that brought together National team and elite player coaches for two days of intensive training on all aspects of the game from theory and practical sessions on the short game to discussion around long term athletic development and talent identification. Two heavyweights on the subject, Dr Ernst Zwick and Professor Dave Collins were also on hand to share their expertise and take questions in what proved to be an informative series of sessions.

Following a bridge day that included practical demonstrations on the range as well as golf on the challenging and immaculately presented Lumine Hills course, the Heads of Training Seminar began on Thursday with subjects ranging from developing golf in emerging markets and linking PGA education to national frameworks. Informative presentations were also conducted by Education Committee members and a number of influential figures, including Niall Flanagan, the former President/CEO of Loch Lomond and Jane Booth, author of the Right Coach, Right Place, Right Time philosophy.

“National coaches and Heads of Training from countries as far as Hong Kong, Canada and South Africa together with many European delegates enjoyed the unique and exquisite services offered by the Gran Palas Hotel and Lumine Golf & Beach Resort in the Costa Daurada region of Spain,” commented Jonathan Mannie, Chairman of the PGAs of Europe Education Committee. “The staff and personnel at both venues offered fantastic service and made the occasion here an unforgettable experience that I’m sure will be repeated again sometime in the future.”

“It has been a privilege for us to welcome some of the leading opinion formers in European golf this week and showcase our credentials,” commented Calle Carlsson, General Manager, Lumine Golf Club. “We are committed to raising the profile of Lumine and golf on the Costa Dorada so the support of organizations such as the PGAs of Europe is crucial to us moving forward. With two championship golf courses on-site we are striving to host high-profile professional events, and following last month’s successful staging of the PGAs of Europe Fourball Championship we believe we are getting close to realizing that goal.”

Lumine boasts a host of world-class amenities, such as a stunning Beach Club, several restaurants, two clubhouses and three golf courses (two of which are designed by golf legend Greg Norman) and managed by leading management company, Troon Golf. Located on 170 acres, its three courses make up 45-holes of golf. The Lakes Course, a links-style championship course designed by golfing legend Greg Norman, features several water hazards that wind around the Sèquia Major wetlands. While The Hills Course, Lumine’s second championship course runs through white pine trees and offers spectacular views of the nearby coastline. Completing the golf offering is the 9-hole Ruins Course, another Greg Norman design, uniquely laid out amongst Roman archaeological remains from the second century BC.