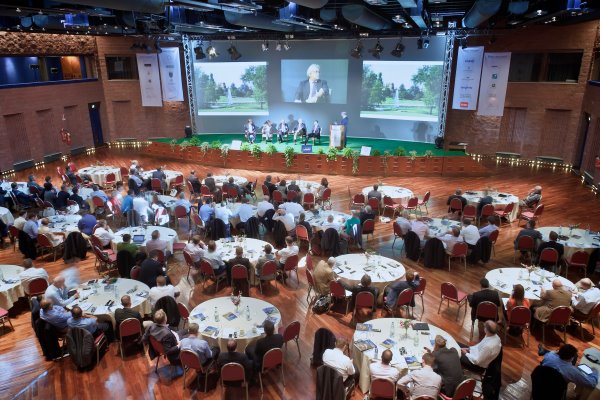 More than 220 delegates from 30 countries attended KPMG’s ninth annual Golf Business Forum at the Renaissance Tuscany Il Ciocco Resort & Spa, Italy, 17-19 September, to network and do business at the golf development industry’s most important annual event of the year.

In the company of six-time Major winner and successful entrepreneur, Sir Nick Faldo, leading hotelier Sir Rocco Forte and the recipient of this year’s Golf Business Forum Lifetime Achievement Award, Troon Golf founder and CEO, Dana Garmany, the conference heard from a succession of keynote speakers and thought leaders on the global trends affecting golf – and the critical importance of sustainability and innovation in growing the game.

The Forum also formed the backdrop for Golf Inc Magazine’s announcement of its 2012 ‘Most Powerful People in Golf’ list, headed for the second year in succession by Dana Garmany, also featuring Sir Nick Faldo and Rio 2016 Olympic golf course designer Gil Hanse, both of whom collected their awards in person. Awards for Jack Nicklaus and Gary Player were collected by sons Jack Nicklaus II and Marc Player, respectively.

The full list from Golf Inc will be published on 1st October.

Innovation and sustainability proved to be key recurring themes throughout the three-day conference with a special keynote speech from Twenty20 cricket creator Stuart Robertson, addressing how to drive participation in sport and linking directly to an enlightened panel discussion on sustainability in golf and ‘triple bottom line’ benefits – people, profit and planet.

Among the thought leaders speaking on sustainability were Jonathan Smith of the Golf Environment Organization, Dr Mike Parkin of Syngenta and course architect Gil Hanse. Hanse revealed that his pitch for the 2016 Olympic golf course had three facets – design, legacy and sustainability.

“Sustainability was an important part of the presentation,” Hanse told the Forum. “We are creating something that may not be the norm in terms of a championship course – it is a par-71 course you can walk – but which will serve as a model for golf courses in emerging markets.”

The conference was opened by KPMG’s Global Head of Innovation Adam Bates, whose fast-paced presentation on technological and geopolitical trends impacting on business was to echo the sustainability debate with predictions of the future scarcity of water and the need for golf to be clear on how to communicate its environmental credentials.

“How do we tell the world that the lovely green grass we play golf on is sustainable from a water consumption perspective?” he challenged the conference.

Giles Morgan, HSBC’s Global Head of Sponsorship and Events, presented the bank’s specially commissioned report ‘Golf’s 2020 Vision’ detailing trends shaping the future of golf including the shift of influence towards Asia, increased feminization of the game, the sport’s adaption to technology, golf tourism and sustainability challenges.

Sir Nick Faldo joined CNN’s Don Riddell for a live on-stage interview and engaged in the debate on participation outlining how the Faldo Series, designed to nurture the next generation of champion golfers, is now active in 28 countries, and is set to expand into the world’s largest market, the United States of America, as well as countries such as Nepal.

Faldo also questioned whether the proposed format for Olympic golf – 72-hole individual strokeplay – was correct, and suggested team golf could prove more popular. He even raised the possibility of mixed team formats, such as mixed foursomes, where both sexes play as partners.

Opportunities for golf development in Italyand the Mediterranean was another key focus for the Forum, with KPMG publishing a new Golf Benchmark Survey for Italy (available to download free of charge from www.golfbusinesscommunity.com)

While the statistics reveal that Italy is a market primed for growth, a series of speakers, including Italy’s most successful professional golfer and its first Ryder Cup player, Costantino Rocca, admitted the country is lagging behind both in golf participation and tourism, although hope was expressed that developments such as Sir Rocco Forte’s acclaimed Verdura Golf and Spa Resort on Sicily would lead the way for future tourist based developments.

Summing up the ninth annual Golf Business Forum, Andrea Sartori, Head of KPMG’s Golf Advisory Practice and founder of the Forum, said: “It has been enlightening bringing the Golf Business Forum to Italy, a country that offers significant potential for golf development. Clearly, the ongoing challenges of the global economic downturn, the lack of liquidity and domestic issues such as bureaucracy, continue to depress opportunities at this time, but the supply and demand factors indicate the potential for a positive upturn as and when the economy begins to recover.

“This week has been a great success and I would like to thank our hosts, event patrons and sponsors, and all of the speakers, delegates and media who joined us at the Renaissance Tuscany Il Ciocco Resort & Spa.”