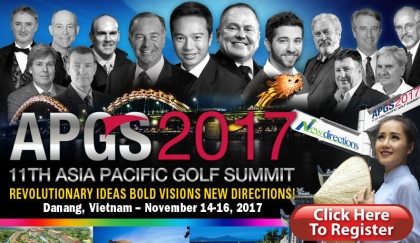 No one can deny that junior golf is not progressing at a cracking pace in Asia. Just look at the rate of Asian youngsters busting through the proverbial glass ceiling and who are making waves in both amateur tournaments and even the world’s professional tours, writes Mike Sebastian.

A classic example of how good our juniors are can be seen in how Thailand’s Atthaya Thitikul, just 14 years of age, has become the youngest known winner of a professional golf tour event. She claimed the record in grand style when she won the Ladies European Thailand Championship, dethroning Canada’s Brooke Henderson who had held the previous record, winning an event on the Canadian Women’s Tour in June 2012 aged 14 years, nine months and three days. She is one of many Thais, Chinese, South Koreans, Japanese and other Asian youngsters who are causing a major stir in global golf.

While these youngsters serve as role models for others to take up the game, it is felt that Asia needs to do a lot more with juniors if the game is to grow and stay healthy in Asia. There are some programmes aimed at growing the junior game but it needs to pick up on reach and scale.

One organisation that is leading the thrust to grow junior golf is the Mission Hills Group of China. When the Mission Hills Group embarks on any project, it invariably sets very high goals – this is the ethos of the company which now ranks as the world’s largest golf resort with multi-billion dollar investments in diversified recreational, entertainment and leisure services.

In keeping with its penchant for always undertaking projects on a mega scale, the group’s commitment to junior golf development is like nothing ever seen before in Asia.

Known for its out-of-the-box-thinking and the derring-do to pull off spectacular undertakings, the group has deemed that 2017 will be a hallmark year for junior golf development. In commemoration of its 25th  anniversary (Mission Hills was founded in 1992), Mission Hills has set itself a target of welcoming more than 25,000 junior golfers through its doors during the year.

“Junior golf has always been at the heart of the Mission Hills philosophy, so to celebrate our 25th year we are aiming to break all records with opportunities for more than 25,000 young golfers,” said Tenniel Chu, Group Vice-Chairman of Mission Hills Group China. “As the world’s largest golf club in the world’s most populated country, we want to help boost the game in China. We will bring golf to tens of thousands of kids of all ages and abilities during 2017 and beyond.”

The 2017 Asia Pacific Golf Summit (APGS 2017) will be placing special emphasis on this development in relation to the need to step up junior golf development in Asia. APGS 2017 is proud to announce that Mr. Chu will deliver a special address at the Summit on the group’s massive initiative to grow junior golf.

A highlight of the 2017 junior schedule is an exciting new international event – the Mission Hills World Stars of Junior Golf Championship and this will be staged in tandem with various youth initiatives in partnership with famous golf course designers like Jack Nicklaus and Annika Sorenstam.

In a further bid to help nurture China’s next generation of golfing superstars, the Mission Hills Golf Academy will continue to select talented young golfers for its junior development programme. More than 20 golfers aged 8 to 16 currently make up the junior squads and receive top-class coaching and mentoring from the Mission Hills Academy’s PGA coaches.

The Mission Hills Golf Academy will also be launching a series of coaching clinics and community outreach programmes during 2017, to attract new players into the game.

What Mission Hills is doing is tangible evidence of the New Directions that golf is taking in Asia. Come and listen to Tenniel Chu as he shares his thoughts on how to develop and grow junior golf in Asia.