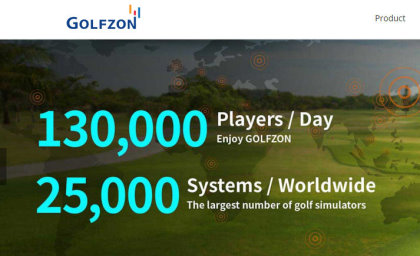 The GOLFZON booth was the site of a rare opportunity on the floor of the Orange County Convention Center, as visitors could hit balls, play famous holes and test drive both the GOLFZON VISION system and the GOLFZON GDR practice simulator. Among the highlights was a demonstration by long-drive phenom Maurice Allen, who broke his own GOLFZON simulator ball speed record on Thursday, Jan. 28 with a drive of 95.4 meters per second/213.4 miles per hour.

There were 42,000 golf industry professionals from 91 countries at the week-long PGA Merchandise Show, with a 3-percent increase in attendance this year. There were 727 customers who discussed purchasing a GOLFZON simulator and several who inquired about U.S. distributorship.

Lim mentioned during meetings with various media that GOLFZON is interested in opening showcase stores in some markets, including Chicago, Dallas, Orlando, New York and Los Angeles, during the year.

“We were very pleased to see the response to our technological advances and the quality of the GOLFZON simulators from PGA Professionals, PGA Show attendees and the media during the largest golf exposition in the world,” GOLFZON CEO Jang Sung Won said. “The feedback we received displayed the interest in simulator golf and the way it can help attract a new and younger audience. The interaction with the global golf industry will serve as momentum for further aggressively targeting North American and global golf markets as we join others in helping to grow the game.”

The comments from prominent executives in the golf industry include:

“Even though golf simulators have been available in the U.S. market for more than 20 years, the business here is still in its infancy compared to the Korean market where GOLFZON is the leading manufacturer of equipment and operator of golf cafes. We would love to see the market develop in a similar way here in the States as it would help to deepen the engagement of existing golfers and bring new people into the game,” said Joe Beditz, President and CEO of the National Golf Foundation.

“According to research recently commissioned by the World Golf Foundation, golf simulators are proven vehicles to deepen commitment to the game on the part of golfers of all ages and abilities. Accordingly, the proven success of GOLFZON in South Korea will serve American golfers well as it makes its product available in the U.S.,” commented Steve Mona, CEO of the World Golf Foundation.

“I credit GOLFZON with much of the success that South Korean LPGA players have experienced. I firmly believe that the seasonality of golf in South Korea, and that it is a more traditional game for men, necessitated that females really had to learn the game on a simulator. The benefit of that is when girls would get instruction, they were focused on fundamentals of a sound golf swing that would later hold up under pressure and weren’t overwhelmed with just ball flight. GOLFZON provided an avenue for females to learn the game properly. I certainly recognize their huge presence in South Korea and am impressed with what they have given back to golf in terms of young talent,” said Bruce Glasco, Troon Golf, COO, Managing Director International Division.

“I recently experienced GOLFZON and am not only impressed with the technology but also the ‘programming’ surrounding the product. The social connections that GOLFZON has facilitated in South Korea through leagues, cafes and other gatherings is intriguing and a much-needed component in order to grow the game. And the ‘virtual competition’ via remote play and networking is certainly the wave of the future. We always support revenue growth for golf courses. Through alternative play and associated, ancillary purchases such as food and beverage, GOLFZON can assist in this effort,” said Joe Rice, Chief Strategy Officer, National Golf Course Owners Association.