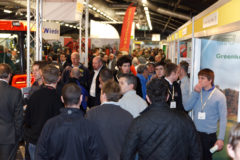 Less than 3 months after BTME closed its doors to a successful 2011 show,  2012 is building up to be even better.

Sue McDonough, Sales Executive on the Exhibition Team, explained, “Having the last show finishing on such a high really helped. We had many of the forward bookings in the bag before the last day on January 20th; that and the early bird discount have had a lot to do with it. However,” she went on, “we’ve been getting the feeling there’s a more positive air about companies and an attitude of optimism out there.”

The figures are even more impressive in that the returning exhibitors spread over 6% more floor area than 2011 – so some are taking larger stand spaces. With the return of the bi-annual exhibitors Hall M is now back in play with only 8 stands left to fill.

Sue again, “One would think that with Hall M vacant this year our job would be easy fitting in the likes of John Deere and Toro for 2012, but that’s not been the case. The large stands these companies need mean some have taken up residence in Hall C, with one going into B.”

Andrew Mellon, Chairman of BIGGA, was keen to demonstrate that regular exhibitors not only maintained their right to re-book a slot, but benefited from the new Loyalty Reward Scheme. “It’s an example of the Association listening to the trade, as those exhibitors that choose to exhibit year on year had felt some financial recognition was due.”

BIGGA have managed to freeze the rates at 2010 levels and although the early bird discount has now expired, the Loyalty Reward Scheme is still available until 16th September 2011. Companies that have participated continuously for 3 years since 2009 will get a 10% reduction for 2012, whilst those that have participated continuously for 2 years from 2010 can claim 6%, and even those that were first time exhibitors in 2011 can get 3% – it’s a win-win for everybody.”

Tim Merrell of the Grass Group was one such exhibitor that took advantage, “Having taken space since at least 2009 means we qualify for the full 10%.  It makes a difference and I appreciate the gesture.  One always has to justify expenditure, but we had a very good show this year and didn’t hesitate to re-book. But it’s the right time of the year we feel,” he went on, “dead time for the Greenkeepers and Groundsman, and a warm environment for them to take a look at what’s new – and spend the rest of their budget before the year end!”

Sherriff Amenity was another, “We had a great show this year”, said Kevin Whitby, Marketing Co-ordinator, “and didn’t delay in rebooking our stand. Having exhibited for many years, were very pleased to be able to claim our 10% Loyalty Discount and support BIGGA again in 2012.”

Floor plans for 2012 are available for potential exhibitors to consult on the www.btme.org.uk web site.  Spread over the usual 4 halls – A, B, C &M – there is a good mixture of companies throughout the site. Machinery manufacturers rub shoulders with seed producers and material suppliers. Even with sales running as high as they are there is a good variety of stand sizes and positions still available.

Sales for Sponsorship packages are also well ahead for this stage in the year.