Creator of Market-Leading Swingsmart Will Take To Stage in London 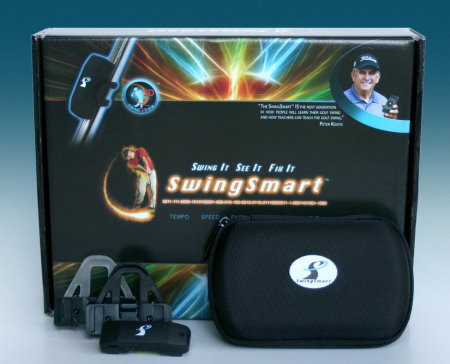 The creator of the market-leading golf swing analysis system, SwingSmart, will be on stage at this week’s London Golf Show to demonstrate why it’s the ‘must-have product’ for golfers wishing to improve their game.

Angelo Papadourakis – originally an attorney before discovering his niche as SwingSmart’s inventor – will be flying in from the USA specifically to address visitors to the show, which takes place at Earls Court from 8-10 November.

He will be demonstrating the simplicity and attention to detail of the award-winning digital swing analysis system – developed in association with top golf coach Peter Kostis – which will also be available for a special show price of just £179.99 – £20 off the RRP.

With the SwingSmart attached to the club, the app shows four crucial data elements relating to the swing: tempo, swing speed, and the angle of both face and attack, and works with every club in the bag – including the putter. A graphical 3D view shows the swing plane and illustrates where improvements may be made. It can be used indoors or out, anytime, anywhere, and the simple, yet essential, display of information can be analysed and interpreted by the individual alone or in discussion with a coach, and is key to game improvement.

An effective practice tool for the off-season, it features a special training mode that provides the key stats necessary to help players learn the proper swing motion, without the pressure of hitting a ball. Included in its features is the ability for players to save what they consider to be their best swing and use it as the model with which they compare the rest of their swings.

And its benefits don’t end there, as SwingSmart can also be used as a teaching aid for professionals, whether it is during a lesson on the range or footage that golfers have taken themselves whilst out on the course and then replay back to their coaches.

Designed in the USA, SwingSmart’s portable sensor module comes with a personal carrying case and rechargeable battery that lasts more than four hours. Widely recognised by PGA professionals as a way to augment lessons, the app is available for free download via the iTunes store and Android Marketplace.