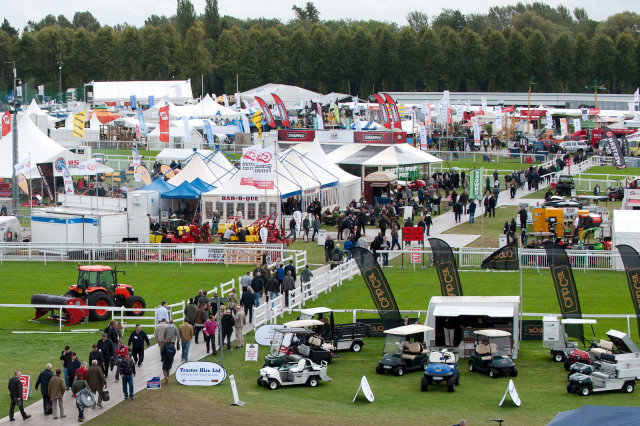 Despite the inclement weather during this year’s three-day IOG SALTEX turf and open space management show, exhibitors were reporting a high number of serious enquiries – and sales leads – starting right from the first few hours of the exhibition.

D J Turfcare was among a number of companies that reported sales almost as soon as the show opened. David Jenkins, Managing Director, announced that he had sold a Plugger PL855 Pro HD aerator which was being launched at the show. And Gary Mumby of BLEC Global reported the sale of a BLEC Laser Grader.

Gary said: “Despite the heavy rain during day one, I still took lots of serious enquiries, which will be followed up after the show.”

As the show closed, Gary added: “IOG SALTEX was a terrific show; we sold eight machines from the stand (including our new Shakervator, Stumpgrinder and Blecavator) and took dozens of enquiries.”

Day one was also a good time for The Grass Group, as Managing Director Tim Merrell, reported: “A national contractor came to our stand last year and expressed an interest in a Trilo vacuum/sweeper. On the first day this year he came to the stand and ordered the machine. What a start! We’ve seen a good mix of visitors – including local authorities, schools and colleges – and took an order from a golf club for a SmartCut.”

It is no surprise, therefore, that DJ Turfcare, BLEC Global and The Grass Group were first among the almost 70 per cent of exhibitors which have already re-booked for next year’s event.

The 9,500 visitors (unaudited) from across the open space management sector had plenty to see on the 360 stands that housed a total of 429 companies: the showground was dominated by new products, details of many being shrouded in secrecy until the show opened. Etesia, for example, unveiled no less than 15 new products – including the Bahia M2E, the world’s first fully electric ride-on cut and collect mower.

Numbers aside, it was clear that many exhibitors were, of course, focused as much on the quality of visitors who attended – and IOG SALTEX did not let them down.

Nick Darking, Sales Manager at Charterhouse Turf Machinery, led the plaudits: “We’ve seen a good quality of visitors, ranging from local authorities, schools and colleges to golf clubs. There’s been a lot of interest in our new products, and we’ve seen an increase in the level of enquiries for our synthetic surface maintenance equipment.”

Ian Howard, Managing Director of Dennis/Sisis, added: “Fantastic! We’ve had a great response. We’ve seen a lot of dedicated Sisis customers and we’ve had some very complimentary comments. IOG SALTEX was particularly critical for us this year and I’m pleased to say that we’ve seen visitors from local authorities as well as bowling, cricket and tennis clubs – a good variety. We’ve seen some overseas visitors as well, with good export potential.”

And Greenmech was celebrating the success of its new Quad-Chip/-Trak wood chipper, which was pronounced as the winner of the EDGE (Expo Demo Green Europe) Product Innovation Award. This will now go forward to be judged internationally with the overall winners.

IOG SALTEX 2012 will be held on  4-6 September at Windsor Racecourse, www.iogsaltex.co.uk