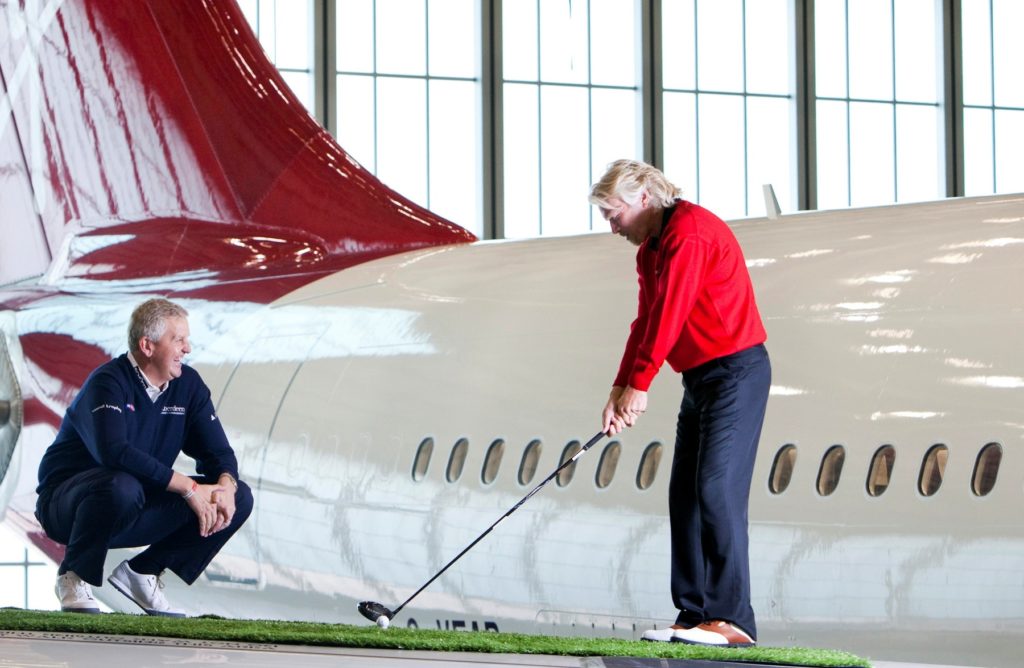 Sir Richard Branson is not known for doing things by halves and he lived up to his thrill-seeking reputation by celebrating Virgin Atlantic’s involvement in this year’s Golf Live show – with a golf lesson on the wing of one of his planes.

Virgin Atlantic is an official partner of the event, which takes place at the London Golf Club from 18-20 May, and Branson recruited the services of European Ryder Cup winning captain Colin Montgomerie to help put his game on the right track.

Montgomerie, an eight-time winner of the European Tour’s Order of Merit title, spent 30 minutes passing on advice and tips to the airline’s founder… perched four metres up in the air on the wing of the aircraft.

Adventurer Branson, who has made several world record attempts, said: “Colin Montgomerie is one of the greatest golfers in the world and to have any hints from him was a real privilege. He gave me a few lessons and I need a few as golf is not my best sport and most of my game is on a wing and a prayer!”

Montgomerie said: “I have had some unique places to play golf during my career but nothing quite like this. To stand four metres up on a wing and give a golf lesson to Sir Richard Branson is very, very different. It’s great.”

Golf is a growing market for Virgin Atlantic, which flies to an expanding number of golf destinations from London Heathrow, Gatwick,ManchesterandGlasgow.

These include routes to Florida, Las Vegas, California, Dubai, China, Australia and the Caribbean and the company’s fleet of long-haul aircraft is undergoing a major refurbishment programme to ensure they have the most innovative products and services.

In addition, Virgin Atlantic operates a policy that allows golfers to travel with their golf bags at no extra charge on top of their free baggage allowance.

Branson added: “We have a lot of people working for Virgin Atlantic who are golf-mad and we carry a lot of golfers so I thought it would be a great event to sponsor. The great thing about Golf Live is that people can get close to great golfers like Colin, talk to them, get feedback and hints on how to play the game and have a really fun day out.”

Golf Live is the world’s leading interactive event of its kind featuring a host of the game’s leading players and everything a golfer could desire.

Pete Cowen, coach of world number three Lee Westwood, will also be on hand to share his swing methods and secrets while consumers will have the chance to try out the latest in golf club technology from the game’s top brands.

Leading manufacturers including TaylorMade, Callaway, Wilson, Cleveland, Mizuno, Yonex and Cobra will all be present to demonstrate their latest equipment on the show’s 30-bay outdoor driving range.

In addition, the likes of Gleneagles, Oakley, Sandals, Tommy Hilfiger Golf, Sun Mountain, Snooper, Archer Golf, Turnberry Resort and Lambda will also be among the impressive cast of companies involved.

And as well as being able to watch, listen to and ask questions of the star-studded cast during the three-day show, people also have the chance to play alongside the Tour professionals with Golf Live’s Heritage Hospitality Package available for just £375 plus VAT per person.

Tickets for Golf Live cost £20 for adults while under-18s can gain free entry by registering on Golf Live’s website.

To enquire about booking a hospitality package, phone 020 7471 1080 and for more information or to buy tickets visit www.golfliveevent.com