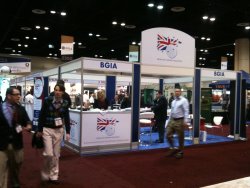 The BGIA’s presence at the show, having not visited for some years, was a resounding success despite a smaller than anticipated UK exhibitor pavilion.  This was testament to the success of the BGIA members lounge facility which provided over 20 UK companies with a central location to meet and conduct important business meetings.

Situated in the centre of the products and accessories section of the show, the UK Pavilion included BGIA members Brand Fusion, along with 2Thumb Grip and Dave Hicks Putting.

Speaking of their companies huge success at the event, Julie Abbott from BGIA member Brand Fusion said: “For our first year as exhibitors at the show we noticed how buzzing the show was with the atmosphere very upbeat and positive.  The BGIA Pavilion where our stand was situated was an excellent position and the lounge facility enabled us to have off-stand meetings which meant everyone was focused rather than being distracted by potential customers.

“The expert knowledge and support given by the BGIA, both before and during the show, along with the assistance in gaining UKTI funding was invaluable and made it possible for companies like ourselves to exhibit at an event which otherwise just wouldn’t be achievable. Many thanks to the BGIA team, we are already looking forward to the 2012 PGA Show and would encourage other BGIA Members to do the same!”

As the show celebrated its 58th year, official figures released by organisers state that the 2011 show attracted nearly 42,000 PGA Professionals and industry executives from 88 countries who filled nearly 10 miles of aisles while previewing the latest products and writing orders from nearly 1,000 golf companies and brands.

With every major equipment, apparel and accessory company exhibiting and writing orders, early attendance figures for the 2011 Show indicate a 3.5 percent increase in overall attendance and a 7 percent increase in PGA Professional attendance.  Attendees came from around the world with the top five countries (outside of U.S.) represented in attendance being Canada, United Kingdom, Japan, Korea and Germany.

The British Golf Industry Association (BGIA) is the national trade body representing UK manufacturers, wholesalers and distributors of golf products and services. The BGIA operates as one of the 18 trade associations under the umbrella of the Federation of Sports and Play Associations (FSPA), Europe’s largest trade body.