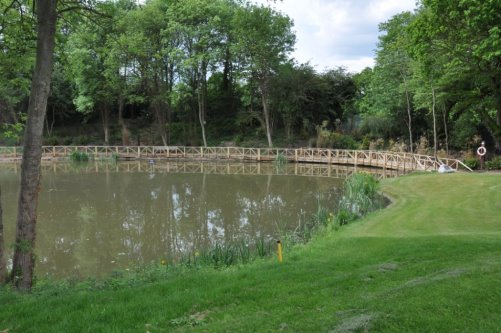 Sundridge Park Golf Club in Kent has as much interest in its trees as in its greens and fairways. So much so that they have their own forester, Terry Gladwell, who planted some of the 250,000 trees – nearly 50 years ago – from which he has built a fabulous new oak bridge over a rebuilt pond.

It is just one of the many tremendous features of this stunning 36-hole club that boasts nearly 1,200 members – and yet maintains a quiet and unassuming entrance near Bromley down a quiet back lane.

Course manager Paul Rudkin, who has been at the club for 26 years, and his team of 12 greenkeepers, plus forester Terry, have their work cut out maintaining this superb course to very high standards.

Speedcut Contractors carried out the dredging of the pond on the 18th Hole of the West Course last November (which involved temporarily removing 2,000 fish, mainly carp, to another newly-built pond on the East Course).

They also regraded and shaped the area in preparation for the paths and bridge installed by Paul’s own team and lowered and laser-graded the 18th tees, which now have a superb view across the water and beyond.

“Speedcut did a great job,” says Paul. “I have known contracts manager Barry Pace for many years and he and his teams are always very meticulous and down-to-earth in their approach. Their attention to detail is remarkable and the results speak for themselves.”

Barry’s team also laser-graded the tees around the renovated pond, which now have a superb view across the water and beyond. They also aerated greens with their Gwazae deep pressure decompacter.

Part of the club’s major investment has also gone on a new practice area facility just completed, with four members bays, a separate teaching bay and a large enclosed state-of-the-art professional’s room that includes cameras to show players how they are improving.

The new range building was a joint venture between Speedcut Contractors and Mike Copson Associates and the results are proving a very popular asset for the club.

The project also included relevelling and extending the existing grass practice tee with Paul and his team, installation of full 25 metre-width Huxley Range mats to the back and improvements to drainage, car parking and access.

One of the most important aspects of Sundridge Park is the care of the 250,000 trees. Members are given tours of the plantation areas and talks on the flora and fauna of the course.

Forester Terry, who gives the talks, has been with the club for nearly 50 years and has seen fairways and greens disappear to make way for tree plantations so that the club can be totally self-sufficient in trees.

The creation of storm shelters from their own harvested timber and the building of the bridge and walkway at the 18th on the West Course are completely down to Terry.

“The trees here are what we are known for,” he says. “They are the most important feature and create a haven for wildlife.”