Son Gual Voted ‘Discovery of the Year’ by European Journalists 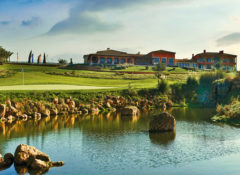 Son Gual Golf Club is celebrating after being voted ‘2010 Discovery of the Year’ for Southern Europe by the European Golf & Travel Media Association (EGTMA).

International members of the EGTMA visited Mallorca in June last year and had the chance to experience the wonderful layout and facilities at Son Gual. They discovered what many of the island’s golfing cognoscenti already knew, namely that Son Gual has taken golf here to a new level.

Having reflected on their 2010 itinerary and evaluated the competition, the members voted strongly in favour of awarding Son Gual with the accolade.

Chairman of the EGTMA Jo Maes was liberal with his praise, commenting: “Members of the EGTMA are privileged to visit many wonderful destinations and courses every year.

“The standard of facilities at Son Gual – both on and off the course – was exceptional and the service we received was memorable. It has an exciting future.”

Golf Son Gual has been lavished with praise since opening in October 2007. Golf World magazine recently ranked Son Gual in its prestigious top 100 European courses, saying it was “…one of the more spectacular courses in the Mediterranean region”, while former Ryder Cup captain Ian Woosnam compared the greens to Augusta National.