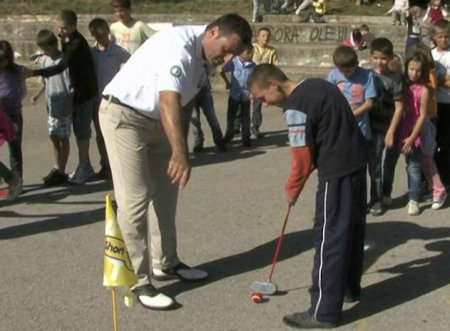 With development under way of the first ever golf course in the Adriatic country of Montenegro, the owner of the facility, Boka Group, has launched its ‘Golf in Schools’ initiative to introduce school-aged children to golf, as a completely new sport in Montenegro. The first event was held at the Children’s Home in Bjela and will be expanded nationwide.

John Kennedy, Founder of Boka Group, owners of the Royal Montenegro Golf & Country Club said: “Our Golf in Schools initiative has got off to a fantastic start. Even though the initiative is about local children it is also attracting international coverage which helps us promote the sport in this country. The faster golf develops the more we can extend sponsorship and training for all those who have a talent for the sport and have just lacked the opportunity to play it.

“There will be long term benefits too, we believe. Montenegro can start to become a cross-season touristic destination which will have a positive impact on that industry and future economic growth. Golf will start to fill the gap between the end of the summer season and the start of skiing in December, giving Montenegro at least ten months of tourism in a 12 month cycle and new job opportunities for young school leavers of the future.”

The first Golf in Schools event at the Children’s Home in Bjela attracted international media with a TV camera crew from TransWorld International filming activities at the launch. The programme will go out on TransWorld Sport to be seen by 200 million viewers around the world.

Sasa Ilic, Boka Group’s Golf in Schools Ambassador and a former international football player with Charlton Athletic, Leeds United and West Ham, said: “Today is a big day in terms of golf in this part of Europe. We have started a programme for schools which will encourage and find new talent for what is a new sport for the country. It is great that as Boka Group’s Golf in Schools Ambassador, I can help give this generation an opportunity to play a challenging international sport. Among this new generation we can find a future championship player. This is just the start of what will become a dynamic part of the lives of people of all generations in Montenegro in the future. We are convinced that the right place to start is with young people and from the very beginning, with the Children at Bjela.”

Royal Montenegro Golf & Country Club including the newly opened driving range is situated on the Adriatic Highway opposite TivatInternationalAirport. Currently it has three target greens on the driving range plus a putting and pitching green with three types of bunkers. Group and private tuition is available from an experienced golf professional for those interested in improving their game. The golf course will be completed in 2016.

Boka Group is a private equity fund backed by British capital developing real estate and homes aimed at western markets. It has supervised or managed over €1bn of development value in Montenegro alone. John Kennedy, founder and CEO, is the founder director of the Porto Montenegro Holding Company, Adriatic Marinas and its original sole shareholder, as well as other numerous deluxe villa developments, such as Sea Breeze.