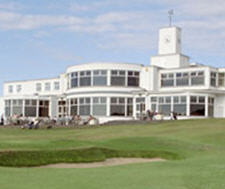 The Royal Birkdale Golf Club will host the Ricoh Women’s British Open in 2014, continuing the Championship Committee’s commitment to ensure that the World’s best women players showcase their talents on the World’s best golf courses in years to come.

The Royal Birkdale Golf Club will host its sixth Women’s British Open when the Championship is staged there in 2014, continuing a strong association with the event that goes back to 1982 when Marta Figueras-Dotti took home the coveted title. The Championship returned in 1986 when England’s Laura Davies triumphed. Sophie Gustafson won in 2000 and five years later Korea’s Jeong Jang claimed her first professional victory by defeating Gustafson and another Korean, Young Kim, by four shots on 16-under par 272. In 2010 Yani Tseng, Number One on the Rolex Rankings, came out on top.

This celebrated club has a rich heritage in hosting the most important golf tournaments in the world and, in addition to five Women’s British Opens, has also welcomed two Ryder Cups in 1965 and 1969 and nine Open championships, the last won by the popular Irishman, Padraig Harrington in 2008.

As the only women’s Major currently played outside the USA, the Championship Committee has demonstrated its commitment to ensuring that the Ricoh Women’s British Open visits only world class championship courses and this celebrated venue fits the brief to a tee.

Yani Tseng recently added the Wegmans LPGA Championship to her haul of four Major titles and, at the age of 22 years 5 months 3 days, is the youngest player ever- male or female – since Young Tom Morris in 1872 to amass four Majors. She expressed delight at the news that the Championship would be returning to Royal Birkdale, “Of course I am a little biased but I think Royal Birkdale is an unbelievable course and I feel so proud to have won there. It has hosted so many great Championships and I look forward to returning there in 2014 where I hope I will win again.”

Michael Hadden, Captain of Royal Birkdale Golf Club added, “We are very much looking forward to the return of the Ricoh Women’s British Open in 2014. The positive feedback from our members and the spectators after last year’s Championship was universal and we look forward to welcoming the world’s best women back in 2014 to show us how it is done.”