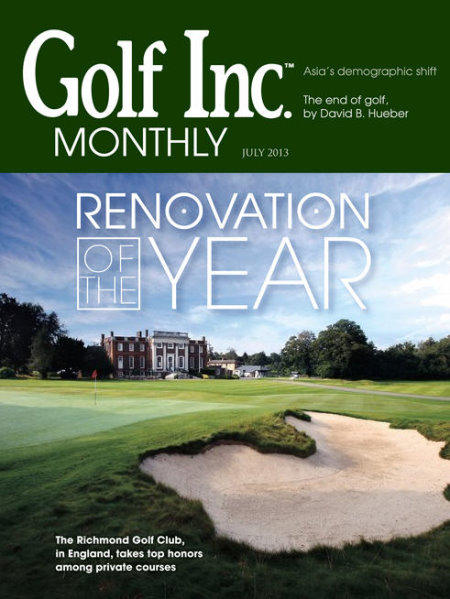 Members of The Richmond Golf Club in south-west London have known that the renovation of their course, led by local design firm Thomson Perrett & Lobb, was a great success since they started playing the new-look course last spring. But now, the work has received the seal of approval from the influential US magazine Golf Inc., which has named the Richmond project the best private club renovation in the world for 2012.

Richmond’s success in the Golf Inc. awards is all the more remarkable, since the project had, by a distance, the lowest budget of all entries in the competition – the entire project was completed at a cost of only £123,000 (just over US$200,000).

TPL principal Tim Lobb said: “Naturally, we’re extremely proud to see our project at Richmond named the best renovation of 2012. We were able to make a small budget go a long way – we reconstructed 56 bunkers and altered two greens, as well as some tree work – because of the great relationship we had with the club, and especially the fantastic work done by Richmond’s greenkeeping team, who carried out all the construction work. In particular, General Manager John Maguire and Course Manager Les Howkins MG were a great support all the way through the project – and in Les, we discovered a shaper of real talent. The reason the bunkers look so good is down to his work, as well as the close supervision we were able to give to the project. I knew we’d be facing guys who spent US$5 million or more, but we thought we did some pretty nice things.”

Golf Inc.’s citation highlighted the “stellar transformation of the course’s bunkers, which have gone from major liabilities to course hallmarks.” One judge added: “This shows, in dramatic fashion, how bunkering defines a course. For the club or owner wanting to make a statement, but faced with limited funds, this is a great example to follow.”

Richmond general manager John Maguire said: “When we started on this project back in 2008, we knew we needed to partner with a professional golf architect who could help us get the best results possible at a sensible cost. We’re delighted that Golf Inc. has honoured us in this way, but in reality the best testimony is the feedback we’re getting from our members and visitors. South-west London is an incredibly competitive golf market, and clubs that don’t improve are going to struggle. We believe this renovation has set us up well for the future, and it’s good to see independent industry figures agreeing with us.”