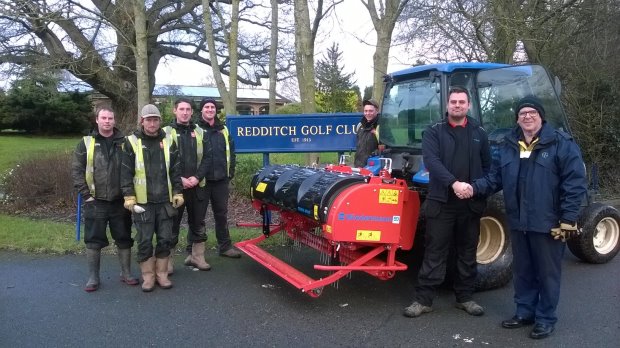 A top Worcestershire golf club has purchased a Wiedenmann Terra Spike GXi8 HD deep tine aerator to deal with compaction and drainage issues on their fairways. Redditch Golf Club, whose exceptional USGA putting surfaces are universally acclaimed, is committed to a programme of further course-wide investment which is already reaping positive results.

Course Manager Karl Williams, who was appointed in October 2014, has a remit to reduce day closures at Redditch and a goal of having the course open all year round within a few seasons.  Much of his early attention has been on the slow draining fairways to keep them playable even in the wettest months.

“The committee has been right behind me. We had the course open between Boxing Day and New Year and had our best week of greens fees ever for that period so we are on our way. But now we can move to the next stage,” he said.

“Until now aeration was outsourced. Contractors were booked once a year and the first year I was here the weather was fantastic and they made a marvellous job. Second time round the weather was really wet and it wasn’t so ideal but we were locked into our booking.

“Now with our own Terra Spike we’ve got absolute flexibility to go out when we want. Plan is every four to six weeks on the greens, every two months on the tees and quarterly on the fairways so the fairways will get tined four times a year instead of one which I’m confident will make a massive difference.

“We expect the aerator to work hard. Four of the lads are trained to use it and the other two will get their training soon so everyone will get their turn. It’s been amazing so far. Easy to use, robust, smooth and incredibly quick even with the biggest tines. Knowing how much work we intend we ordered six sets at delivery; three sets of 20 mm for the fairways, two sets of 8mm for the greens and one set of 12 mm for the tees.

The club took delivery of their machine from T H White in Redditch, Wiedenmann’s local dealers, with Simon Bingham, Area Manager installing it during the first week of the New Year alongside Wiedenmann UK’s Sales Manager, Chas Ayres.

“I’m indebted to Simon and Chas for making it all so easy. We were off and running instantly. Before the month was out we were everywhere with the 20 mm wide tines: the fairways, the tees, the aprons and the greens. We were even able to add 30 tonnes of top dressing and in my 16 year career as a greenkeeper I’ve never been able to do that in January,” continued Karl Williams.

Simon Bingham, Area Manager at T H White said: “The specification on the Terra Spike GXi 8HD was an exact match to what Redditch required. They needed an aerator that was quick, precise and could work effectively across all their areas and that’s what they got so we were very happy to oblige.”

After unveiling its first range of CNCPT irons just over 18 months ago, Titleist has launched two new models under the same family that continue the brand’s commitment to push the limits of performance, design and manufacturing, with no cost limits and using the best materials.

The ranks of the UK Golf Federation is continuing to experience growth during 2020, with membership numbers passing 900 earlier this summer, and now up to a total of 936.

In light of the recent update to the Scottish Government’s Covid-19 guidelines, next week’s Aberdeen Standard Investments Scottish Open at the Renaissance Club will now be played without spectators