New Ranking Puts West Cliffs On Course To Be No.1 In Portugal

The new West Cliffs Golf Links meteoric rise towards the pinnacle of European golf courses has received significant endorsement after it was ranked second in the Top 100 Golf Courses website’s latest list of the top golfing venues in Portugal. 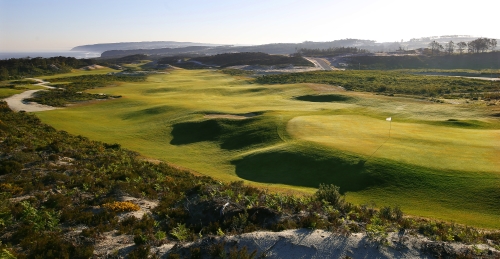 The Cynthia Dye-designed layout jumped straight into the top three of the updated poll and claimed the coveted accolade ahead of many of its more established rivals – despite having opened barely six months ago.

And its management company, Praia D’El Rey Golf & Beach Resort, was given double cause for celebration with the resort’s other 18-hole championship course also featuring in the top 10 of the new standings, being ranked at number nine.

“This place already has people running out of superlatives when trying to describe their playing experience out on the course. West Cliffs is set to become Cynthia Dye’s global masterpiece.”

Named as the World’s Best New Golf Course’ at the 2017 World Golf Awards, West Cliffs has been tipped to become Portugal’s new number one by many golf industry experts and was the highest new entry ever at no.16 in the website’s recent list of the ‘Top 100 Courses in Continental Europe’.

Francisco Cadete, director of golf at West Cliffs Golf Links and Praia D’El Rey Marriott Golf & Beach Resort, said: “For West Cliffs to be ranked as high as second in Portugal is amazing, especially bearing in mind the quality of the opposition.

“The great thing about the course is that it’s only going to get improve further as it settles down and matures. It has numerous holes that will live long in the memory and so does Praia D’El Rey, which fully deserves to be ranked so highly.

“To have two courses in the top 10 is a great achievement for us and a further illustration why, when it comes to taking a golf break, Praia D’El Rey is right up there alongside the best resorts in Europe.”

Among its list of other notable accolades, West Cliffs became a Golf Environment Organisation (GEO) Certified® Development last summer and was the highest new entry at no. 25 in Golf World magazine’s list of the Top 100 Courses in Continental Europe 2017/18, while the course also hosted the 2018 Portuguese Women’s Amateur Championship last month.

The first Dye golf course in Portugal – and only the fourth in Europe, the spectacular par-72 clifftop links lies on stunning terrain on the Silver Coast, less than an hour north of Lisbon. It has been created over 200 hectares of natural landscape and rolling sand dunes and offers sweeping views of the Atlantic Ocean from each hole.

Complementing it is Praia D’El Rey’s 18-hole championship course which, designed by Cabell Robinson in 1997, is set amidst a combination of extensive pine forests and undulating dunes, and features spectacular views over the Atlantic and the Berlengas Islands beyond.

As well as golf, Praia D’El Rey offers an extensive array of world-class sports, leisure and accommodation facilities including a Marriott hotel, a wide selection of villas, a tennis academy, a luxury spa and health club and numerous watersports and restaurants.