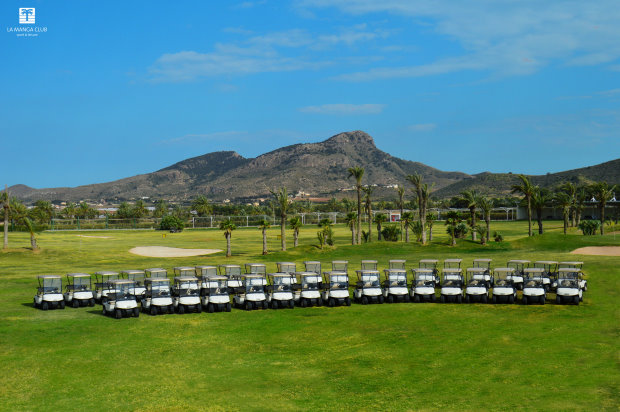 La Manga Club’s golf investment programme for 2016 has moved into full gear following the installation of a new GPS system in its fleet of golf buggies at the prestigious Spanish resort.

Fresh from taking delivery of a range of new greenkeeping machinery, the multi award-winning venue in Murcia, south-east Spain, is offering players an improved golfing experience by fitting its golf carts with the latest Sentinel GPS navigation system.

Incorporating a wide range of features including instant touch screen information, aerial views of each hole, distances to the green and obstacles from any position on the course, internal power supply and cameras that monitor the users’ actions during every round,  the seven-inch screen is easy to use and is the ideal device for golfers bidding to improve their scores.

The tracking system has initially been installed in 55 of La Manga Club’s golf carts – including 37 new ones – with the remainder of its 120-buggy fleet due to be fitted with the GPS technology over the coming months.

Other redevelopment plans at La Manga Club this summer include installing new signage on its three 18-hole courses, improved landscaping and access to each hole and the refurbishment of Bar 37 in the golf clubhouse, while members and guests can already enjoy an improved experience with the redesign of the resort’s golf shop.

Eduardo Ruiz, golf director at La Manga Club, said: “In order for La Manga Club to maintain its position as Europe’s most popular golf destination, it is vital that the resort continues to invest.

“We’re delighted with the new look of our golf shop while the installation of the new GPS technology will not only enhance the five-star golf experience that we can offer but also improve the time it takes to play a round of golf, a big problem in the modern-day game.”

A five-time host of the Spanish Open and set in an area three times the size of Monaco, La Manga Club boasts three 18-hole courses, a nine-hole academy course and a recently-opened Leadbetter Golf Academy among its array of five-star sports and leisure facilities.

Among its recent accolades, La Manga Club was named ‘Spain’s Best Golf Hotel’ for the second year running at the 2015 World Golf Awards, shortlisted at the 2015 Family Traveller Awards and voted ‘Best Golf Resort in Spain’ by UK readers of Today’s Golfer magazine for the fifth year running.

As well as golf, the resort’s extensive facilities also include a 28-court tennis academy, a new High Performance Sports Centre and 2,000m² spa and fitness complex, a five-star hotel, four-star serviced apartments and townhouses and more than 20 bars and restaurants.