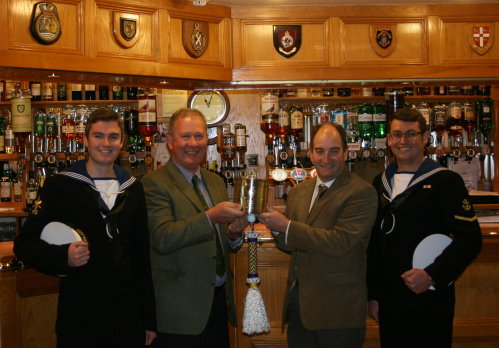 The Type 23 Royal Navy Frigate HMS Sutherland was named after the Highland County and throughout its career has enjoyed a special relationship with the shire and its people. This is nowhere more evident than at Royal Dornoch Golf Club where the crew have made several visits in recent years to enjoy a game of golf as well as the friendship of the members.

The Club has been very supportive of this special relationship so when they required a bell for the bar in the clubhouse there was only one place to go.

HMS Sutherland last visited her namesake county in March this year, when the ship was open to visitors.  Neil Hampton, the General Manager at the Golf Club, was in discussion with  WO2ET(ME) Chris Jones, the propulsion manager on the vessel and the organiser of the most recent golf excursion to the Club in November last year, to enquire whether they had a bell going spare. Chris was keen to help out but bells are not something in great supply these days so everyone one the ship had to get their thinking caps on.

Back in March the ship had to set sail from Invergordon earlier than expected. The reason for that hurried departure was her call to participate in theUKand NATO action offLibya.  She operated as part of a task group protecting the Libyan people from attacks by Libyan dictator Colonel Gaddafi.  Providing naval gunfire support from theGulfofSirte, she bombarded key Gaddafi targets on shore, and also provided boarding parties to inspect vessels entering and leaving Libyan ports, and so enforce the economic sanctions on the Gaddafi regime.

A very busy summer for HMS Sutherland also saw her visit Crete (to mark the 70th anniversary of the WW2 battle there) and make a long trip to carry out liaison with our allies in the United Arab Emirates.  The ship and her crew returned to her homeport of Plymouth in August.

It wasn’t until November that Neil received a call from ETWE Mike Brown, one of the engineering team on the ship, to say that they had “fashioned” something that they thought was suitable and could they come up to present it to the Club now that the ship was in Plymouth for a few weeks.

It was with great curiosity that Neil and Club Captain Hamish Macrae met with Mike and Leading Chef Andrew “Dickie” Davis to receive the bell. What they got was what was left of a 4.5” shell casing that had been beautifully turned on a lathe and then suitably engraved with the ships crest and a message to the Club. A fine piece of rope work was the perfect finishing to hang on the clapper that is a Royal Dornoch golf ball.

Hamish Macrae said: “Having this connection with HMS Sutherland is very special for everyone in Dornoch and especially at the Golf Club. We believe that all the personnel are providing a vital service to the country and we will do our utmost to support them when at sea and to make their days on shore as special as possible. The bell is a magnificent piece of work and will provide us with a tangible reminder of the ship at all times for everyone who comes into the bar.”

Commander Roger Readwin who is just about the leave the ship after two successful years in charge commented “We are delighted that we could help the Club. They always extend a warm welcome to us, last year they arranged a match for us against the ladies section as well as entertaining us at the one of the junior fundraising quiz nights. My team all feel that there is a special bond with both the Club and the town and they desperately wanted to show how much this meant to them.”  He added “When Neil got in touch about the bell it presented the ideal opportunity for us to reaffirm our affiliation, my engineers have produced a fine gift and I am very pleased that I was still on board to see it safely delivered to the Club. While I am moving on the rest of my crew are looking forward to their next visit early next year and further enhancing the close links that we have developed.”