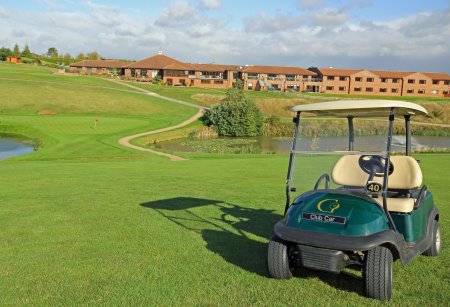 Greetham Valley Hotel, Golf and Conference Centre, in Rutland, England, has revealed its Club Car fleet has enabled it to generate £90,000 of revenue annually, since 2010.

Starting off with just two vehicles in 1992, the East Midlands resort has steadily grown its fleet to a unit of 40Precedent i2L cars, equipped with the industry’s most robust 8-volt battery and Club Car’s latest Excel™ Drive System, which features enhanced acceleration control and more options for speed range programming.

“We were, like many golf courses looking at a new undertaking, cautious about our investment and opted initially for just a couple of golf cars,” explained Greetham Valley HG&CC Managing Director, Robert Hinch, who runs the 276-acre estate with his wife Dee Hinch.

“However, we quickly realised that, with only two cars available, guests mistook these for mobility vehicles, so we increased our fleet size to five cars.

“This continued and when Greetham’s third nine-hole layout opened in 1995, we had 20 vehicles. Just four years later, we increased it again to 30, coinciding with the opening of the fourth nine holes.

“The 40-strong fleet of electric Club Car Precedents that we now operate appears to be the optimum level for our 45-hole complex.”

Robert continued: “From the outset, rental income from the golf cars played an important role in helping increase our revenues, not only with the direct income from the cars themselves but also increased green fees, especially from visiting society days, golf breaks and corporate events.

“It was clear that, as we grew our offerings at GreethamValley– going from an 18-hole course in 1992 to a 45-hole complex in under eight years –more customers required the option of a golf car.

“Combined with corporate days and an increasing number of society days, our fleet had quickly become an important revenue generator.” Robert added.

“Set amid beautiful undulating Rutland countryside, with a winding valley a key feature here, golf cars enable many of our members and visitors to enjoy the courses without finding the slopes too daunting.

“What was critical for us though, was to provide from the start, a quality golf car that is totally reliable, has the latest battery and drive train technologies – which Club Car delivers every time with their industry-leading products.

“It is fair to say our relationship has grown over the years and we see it continuing to evolve as we invest further in our sport and leisure facilities.”

Since it first opened in 1992, GreethamValley has become one of the East Midlands’ finest sport and leisure destinations, offering, in addition to 45 holes of golf, a petanque court, bowling green, 4×4 off-road and quad bike centre, archery range, coarse, trout and salmon fishing lakes, gym with a resident GP and a falconry centre.

It also boasts a nine-hole, par three course and driving range, as well as a 35-bedroom hotel, conference centre and function suite, which were opened in 2005, before a further eight Norwegian log cabins together with an adjacent holiday cottage were added to provide greater flexibility and choice of accommodation available.