Gleneagles Readies for 2014 Ryder Cup with Toro equipment and irrigation 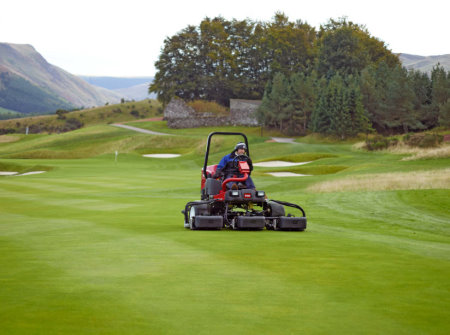 The 2014 Ryder Cup began earlier this morning but the countdown to the prestigious tournament between the United States and Europe began a decade ago for this year’s host, Gleneagles Hotel in Perthshire, Scotland. Gleneagles was awarded the event in 2001, and every year since 2004, the five-star luxury resort has been making major investments to structurally improve its hotel and spa facilities and update its PGA Centenary Course, where the Ryder Cup will be played September 25-28.

“It’s been a major project and long process,” said Steve Chappell, head greenkeeper of Gleneagles’ Centenary Course, on the extensive renovation to get the course ready for this year’s Ryder Cup. “Every week another bulldozer shows up or contractor comes in and we’re doing this, we’re doing that. There was a lot going on.”

Chappell, who took his post at Gleneagles in October of 2011, says significant changes have been made to several of the Centenary Course holes over the years in preparation for the tournament.

For example, Hole 12 was shortened from a Par 5 to a 445-yard Par 4, and Hole 14 was extended from a Par 3 into a drivable 320-yard Par 4. Additionally, Gleneagles consulted with golf legend Jack Nicklaus in 2010 on how to modernise the course. “Technology has come a long way since the PGA Centenary Course opened in 1993 with distance and ball fly, so [Jack] Nicklaus really wanted to make the golf course more of a modern day challenge,” said Chappell. Following Nicklaus’ recommendations, Gleneagles completely rebuilt Hole 18, installed a large lake alongside Hole 9, rebuilt all of the bunkers, and re-contoured the green on Hole 6.

The Nicklaus-inspired renovation took place in 2011, and involved shifting about 50,000 tons of earth, and upgrading the course’s irrigation system with Toro® DT Series sprinklers. Now that most of the major construction has concluded, Chappell says he can finally focus on getting the course ready for tournament play.

“This year’s focus has all been about turf conditioning and creating a consistent playing surface,” said Chappell, who was able to draw on the experiences he gained during the 2012 Ryder Cup at Medinah Country Club and the 2010 Ryder Cup at The Celtic Manor Resort in South Wales.

To ensure the fairways are firm and dry for the September event, Chappell and his team have applied more than 10,000 tons of sand to the fairways. This will give the course a 50-millimeter sand profile on top of what is already there.

In order to handle the extra turf maintenance required before and during the Ryder Cup, Chappell will expand his current crew of 20 greenkeepers on the Centenary Course to a team of around 70-90 people. This includes greenkeepers from Gleneagles’ two other courses, and about 40-50 volunteer greenkeepers from courses all over the world.

Chappell says one of the most important tasks he and his crew will have during the Ryder Cup is to set and maintain the pace of the course. Chappell says, “the smallest changes in cut lengths, even a few millimeters, can make a big difference in the way the ball rolls on the putting surface. For the Ryder Cup, the cut needs to be perfect, right on the money.”

“If Europe’s Ryder Cup Captain, Paul McGinley, wants the greens to be at a certain speed he deems fair, then that’s what we need to aim for,” says Chappell. “And if that means that our greens are at four millimeters or if that means our greens need to be at three millimeters, and they need to be cut three times a day, and rolled twice a day, then that’s what we’ll do.”

With Gleneagles recently extending their partnership with Toro as the exclusive provider of turf maintenance equipment, Chappell has found that his fleet of Toro equipment provides the precision, quality of cut and consistency required to meet the demands of the world’s best golfers playing in the tournament.

To create top playing conditions, Chappell and his team are using Toro’s Greensmaster  Flex 21s for the greens, Greensmaster 1600s for the tees, Reelmaster 5410s for the fairways, and Reelmaster 3100s for the intermediates and surrounds. They also rely on a fleet of Workman MDX and HDX utility vehicles, ProPass topdressers, and ProCore 648 and 1298 aerators.

“We run a fleet of Toro equipment here at Gleneagles across the resort and three golf properties,” said Chappell. “Their quality is fantastic, both in the machines themselves and the quality of cut they deliver. Toro machines always perform at the level we expect, and we couldn’t speak more highly of the support we get from Lely UK. Toro consistently delivers what we require.”

While the televised event brings added pressure to Chappell and his team, Chappell says he’ll is ready and excited to show the world what a “magical” place Gleneagles is.

View video interviews with Chappell and others on Gleneagles’ preparation for this year’s Ryder Cup on Toro’s YouTube channel at www.youtube.com/playlist?list=PL6KlztUF_qYb-2Mb93rX8T-WHyVXDTQ9H

Swedish tour player Alex Noren has formed a brand partnership with Swedish golf apparel brand Macade Golf that will see the world no.37 wear the company’s clothing when competing on the global professional tours this season.

FlightScope, a leading player in the tracking and analyzing of sports performance data, has announced the addition of a Face Impact Location add-on option for the FlightScope Mevo+ Pro Package.