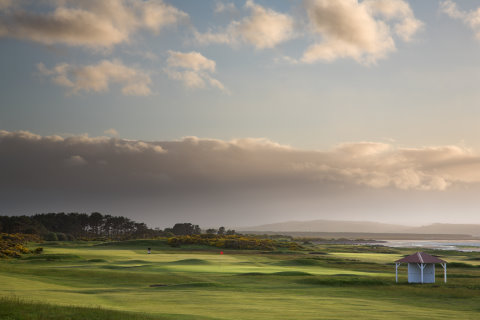 With 100 days to go before the start of the 2012 Curtis Cup, preparations for the biennial contest are nearing completion at The Nairn Golf Club. The main thrust of the three-year project will conclude this month when the last of 60 bunkers earmarked for revetting is rebuilt.

The renovation work being carried out across the famous links course has resulted in 60% of the bunkers at The Nairn Golf Club being given a fresh, new look. The extensive project, which has been executed over three successive winters, began as soon as it was confirmed that the club would host the prestigious team showdown.

“We started planning as soon as we knew the Curtis Cup was coming to Nairn,” explained Iain Carson, golf course manager at The Nairn Golf Club. “As soon as we knew, we started formulating what we wanted to do to ensure the whole course would be in tip-top condition come June.”

Although the work was meticulously planned, this year’s mild winter has helped the project progress quickly. “Because we haven’t had the snow we had during the last two seasons, we’ve been able to get a lot more done. For instance, more bunkers have been revetted and we’ve been able to get on with work on the greens, tees and fairways. It has allowed us to do an awful lot more on the golf course to help prepare for the summer,” saidCarson.

The Nairn Golf Club is one of only 10 clubs to host both the Curtis Cup and the Walker Cup, which was played out across the Highlandlinks in 1999. Its rich heritage also includes the Scottish Amateur Championship which came to Nairn in 2006, and the Seniors Amateur Open in 2007. Indeed, with a traditional links layout refined over the years by the likes of Archie Simpson, Old Tom Morris, James Braid and Ben Sayers, where better to contest the 37th Curtis Cup?

“Our Curtis Cup squad will visit in March when the players will get their first taste of the wonderful links at Nairn. It is without doubt one of the finest courses in the land and everyone at the club is working hard to ensure that this year’s Curtis Cup match will be one to remember. All aspects of the infrastructure planning are on schedule and we just need the spectators to cheer on our team to victory”, noted the LGU’s CEO Shona Malcolm.

As the final preparations are being made to the 18-hole Championship Course at The Nairn Golf Club, expectations at the club are also reaching a crescendo. “It is tremendous that we have held so many national tournaments,” said Carson who will retire after 31 years at the club following the Curtis Cup. “It is brilliant that a club in the north ofScotlandhas been able to do that and people want to come back and play this old links course again and again. To be a part of that has been a wonderful experience.”