Campey take Swords from the stone with Air2G2

An Air Inject Air2G2 supplied by Campey Turf Care Systems has helped transform the greens at Swords Golf Club, Co Dublin, Ireland, with previous methods proving ineffective because of stones in the greens.

The initial pay and play nine-hole course was founded in 1992, and the sand based greens that offer little drainage below the surface were prone to flooding due to being so flat. The 18-hole Roganstown Course was added in 2003 with USGA specification greens, and the Air2G2 is now a main feature of the maintenance programme.

Course superintendent, Colm McGuinness, had been using a deep tine aeration method prior to the acquisition of an Air2G2, but he explains the issues he found when using other methods and the vast benefits the Campey supplied machine has had on his courses.

“I had an issue with solid tine aeration because we have a lot of stones in our greens and you could bend 50 tines in one session,” Colm began.

“Also, you can’t get down 12-inches with the any other method, it’s nearly impossible. So being able to do it with the Air2G2 and give it a blast of air is fantastic.

“Since we got the Air2G2 it it’s been unbelievable. It’s so easy to cut a hole, the greens look a lot healthier and my black layer has gone. My first green was jet black, you’d pick a sample of it up and it would smell foul, but it’s gone completely in less than five months.

“I haven’t used any alternative vertical aeration on the pay and play course since using the Air2G2 and the greens are first class. I haven’t missed using it because I’ve got very little disease, the sward is fabulous during the winter. 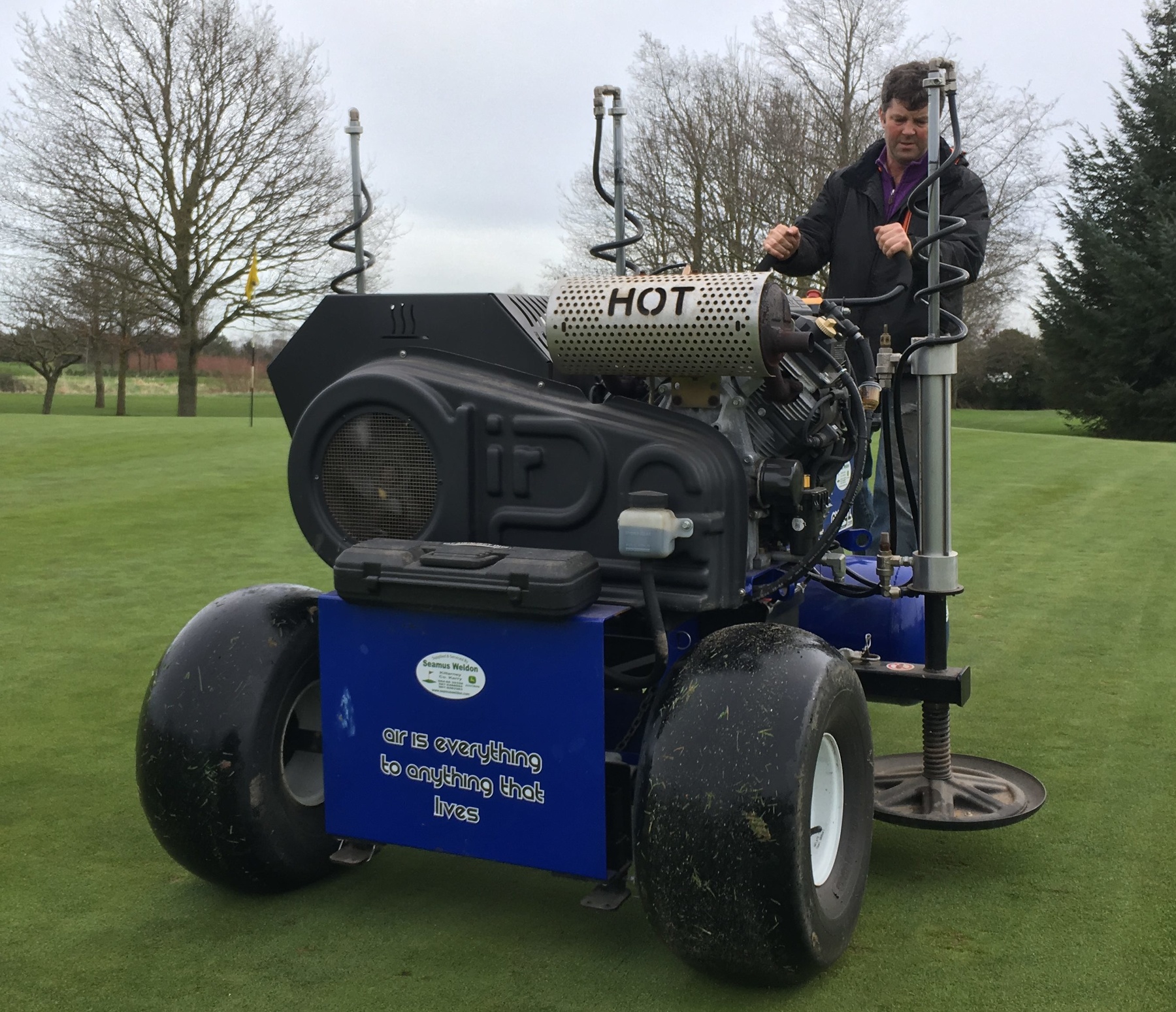 “It’s transformed what we’re doing here. Last year in February we solid tined and we had the members complaining about the greens. But when we had the demo of the Air2G2 we used it on one of the Swords greens twice and no one knew that we had been on there.”

The machine is now a mainstay in the maintenance programme across both courses and has improved all the greens considerably. Despite still being flat and prone to puddling on the pay and play course, Colm has seen half an inch’s worth of rain collect on the greens and then drain through within half an hour of rain stopping.

He has achieved this by deploying the machine on the pay and play course six times a year and on the Roganstown Course four times. Using it at two-metre spacing’s means he can cover nine holes in one day, allowing for a quick and extremely effective aeration operation.

Doing this has seen considerably more success than using other methods which would cause issues like surface heave and spongy greens. This in turn would lead to foot printing and the need to have them hand cut for up to two-weeks afterwards.

Now every one of the 36-greens and three large putting greens at Swords Golf Club are in top condition across the 270-acre through the use of the Air2G2, with maximum playing hours and minimal disruption.

PlayMoreGolf, the first flexible golf membership linking individual golf clubs across the UK under one membership, has witnessed unprecedented demand for the online platform since the Government lifted restrictions on playing golf in England and Wales

Offers are invited in the region of £1.0 - £1.25 million for The Herefordshire Golf Course, established in 1896 and dubbed ‘The Gleneagles of The Midlands’

Almarose Hotels & Resorts, the UK’s largest golf resort operator, has reported record breaking number of golfers playing its six venues in the UK following golf's reopening on May 13 after the relaxation in the Covid-19 lockdown measures.