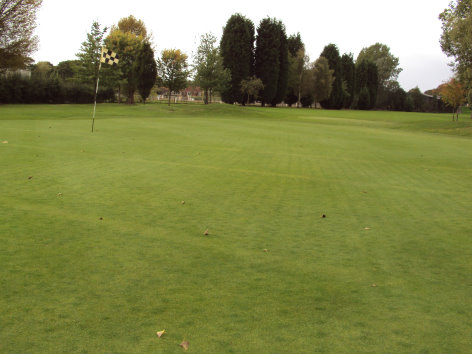 Members and visitors at Ashton on Mersey Golf Club have seen the first green transformed with the use of Avalon and Vesper velvet bents. Part of a programme of course improvements designed to keep the club on track during these difficult economic times, the greater consistency and improved speeds on the green have been welcomed by golfers.

“We have decided to invest in what we believe is the golfer’s priority, the quality of the course, to help us retain and increase membership,” says head greenkeeper John Stepney.

The 115 year-old nine hole course winds around the River Mersey, and with the push up greens on heavy clay and silt, they tend to be wet, with heavy shade on the first exacerbating the problem. Annual Meadow Grass predominated, giving a spongy feel that did nothing for playability.

John explains: “I’ve been working with Paul Moreton at British Seed Houses for four years, and have gradually introduced Aberroyal to combat the issues with Poa. But last year we drained the first green and removed some trees, and seeded with Avalon and Vesper velvet bent.”

The result, he says is a green with a dense, healthy sward and bent grasses which have established well in the improved conditions.

Seeding with 20kg of Avalon and Vesper was an easy process, after scarifying and verticutting, the seed was placed just below the surface and a light topdressing applied. Germination took less than a week, and John estimates that having been more than 50 per cent poa, the green is now 60-70 per cent bent grasses.

“The green dips down to the front right hand corner and could be expected to be wetter with more poa, but is absolutely fine, with plenty of bentgrass,” he comments.

Inputs are also minimal – Ashton on Mersey Golf Club aims to be as sustainable as possible and the low nitrogen and water requirements of velvet bents certainly contribute to this.

“I had read about issues with thatch, but we have not needed to increase maintenance,” says John. “We have a fairly rigorous aeration programme anyway, and thatch has decreased considerably with the dryer conditions and extra sunlight on the green. We just hollow tine twice a year and use a sarel roller, so there is no extra work.”

Paul Moreton explains: “With the aim to be the best course in the area you need to keep re –evaluating your inputs. John has had tremendous success with his species transitions. Firstly getting AberRoyal brown top bent established and now moving on to Avalon and Vesper Velvet bents which provide the best surface for putting bar none, the technical traits of disease resistance; drought and wear tolerances will help improve the greens and his sustainable goals. The old scare stories of thatch production and maintenance alterations have been non-existent with Johns’ initial changes. I predict this will continue to be a smooth transition as many of the other Green Keepers who I’m assisting with their transitions can now lay testimony to.”

The developments have seen green speeds increase considerably with cut heights at 4mm, although John says that his aim is for consistency rather than for especially fast greens.

“It has really opened our eyes to what can be achieved for a relatively small investment,” John comments. “We are now looking to expand the programme to our other greens – the first green has gone from being the worst on the course to the best.”

History will be made on the Ladies European Tour when they play in Saudi Arabia’s first female professional golf tournament in November.

A research study backed by The R&A has found new evidence to suggest golf can provide significant health benefits to older participants in the form of improved muscle strength and balance.