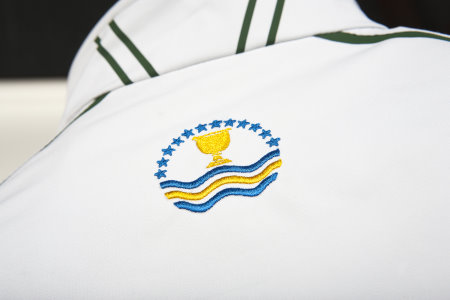 In developing the program, Sunice® wanted to ensure that the players and caddies were provided with the best defence against any, and all possible weather conditions.  It was decided at that point that GORE-TEX® fabrics would be the best choice for protection from rain and wind.  Garments constructed with GORE-TEX® fabric enhanced with Paclite® technology ensure the lightest weight performance fabric.  Coupled with this technology and the uniquely designed construction of each of the selected garments, Sunice® was able guarantee full freedom of movement to the players, allowing them to perform at their best in ultimate comfort and protection.

“We share Nick Price’s confidence that his team will be equipped with the very best performance outerwear available and will be well prepared for any challenging weather condition they may face,” said Mark Fletcher, President of Sunice®.

The outerwear for The Presidents Cup 2013 International Team uniforms will be constructed of GORE-TEX® fabrics enhanced with Paclite® Technology and WINDSTOPPER® 3L soft-shells.  The players’ uniform package includes: a full-zip rain jacket with stretch back panel inserts, short sleeve rain pullover, rain pants, and a WINDSTOPPER® full stretch 3Layer softshell vest and, of course, the final piece to the uniform, a waterproof bucket hat.

“It is a great honour to be able to outfit the best of the best of the International players”, said Kathryn McClemens, Senior Product Manager for Sunice.  “To work closely with Nick Price and the PGA TOUR was a unique experience as it was a pure collaboration in designing and developing the uniforms.  We went in to the initial meetings and it was clear there were specific ideas of the overall look that was expected for the uniforms.  But after discussing and playing around with different colour palettes and concepts – everyone, especially the team captain – was so receptive to breaking out of the box a little, giving a fresh look to the outerwear portion of the uniforms and allowing us to be true to ourselves and deliver a program that is purely Sunice®.  The overall appearance is nothing less than spectacular and the International Team will be nothing short of the best-dressed team.”

“As we get closer to The Presidents Cup, the anticipation is mounting as we anxiously await the appearance of the International Team in their custom-designed Sunice outerwear suits,” added Mark Fletcher