Snow is no Problem for Foremost’s Elite Marketers 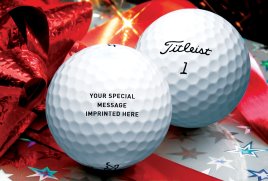 Just over 100 of Foremost’s 1,000-plus members signed up to take part in a special Titleist FREE Ball Personalisation offer through the group’s weekly EMP (Elite Marketing Programme) on-line newsletter and they were rewarded with soaring sales despite the inclement weather and the fact that many of their club courses were covered in snow at the time.

The Titleist FREE Ball Personalisation offer was a national promotion run by the leading ball manufacturer and available to all their stockists but its results clearly show that the foremost professionals who fared best with the promotion, were those that communicated it through the Elite Marketing Programme.

“We believe that the promotion generated over £60,000 of additional ball sales for Foremost professionals which is an incredible figure at a time when so little golf was played,” said Andy Martin, Director of Foremost Golf.

“We can’t reveal the exact figures but there is no doubt that the Foremost members who promoted the offer through our EMP on-line newsletter achieved significantly  better results than those members who chose to communicate the promotion using more traditional methods.”

“The statistics show that the 10% percent of our members who communicated the offer through their on-line newsletters achieved 54% of the sales which is a pretty impressive figure and will be food for thought both for existing EMP members who decided not to participate in the digital communication of the offer and for those Foremost members who have still not signed up for our Elite Marketing Programme.”

One Foremost member who was delighted at the results of the Titleist FREE Ball Personalisation offer was Stuart Dowsett, the Head Professional at Sundridge Park Golf Club.

Through both the EMP on-line newsletter and a strong in-store promotion Dowsett estimates that he sold around 100 dozen more golf balls than he would have done had he not agreed to take a full part in the promotion which just goes to show the golf business does not necessarily grind to a halt even when there is snow on the ground.

“I have no hesitation in saying the promotion was a great success and feel that Foremost members who didn’t sign up for it definitely missed out,” said Dowsett. “I can’t help but feel that Titleist must also be delighted by the sales generated by Foremost’s EMP members and believe the success of the Titleist promotion will show other manufacturers what can be achieved by teaming up with us.”

“I certainly hope so because more promotions like this would be good for us all,” he added.

The Foremost Digital Campaign team already have a number of promotions agreed with suppliers for 2011 and will be communicating these to the EMP member professionals throughout the year with at least two significant promotions for the start of the season.