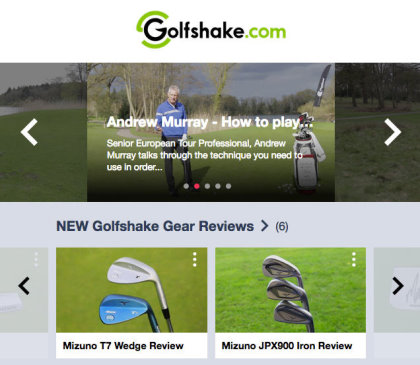 Golfshake.com, Europe’s largest scoretracking site, has seen a sharp increase in video views during 2016 with the tuition section enjoying the biggest growth. Visits to the library of tuition videos has increased by 111% compared to the previous period.

With over 800,000 videos viewed, across the Golfshake network, the tuition section is proving to be a popular draw as Golfshake members combine their use of the online scoretracking system with the tuition content to make improvements to their game.

“Golfers are using the Golfshake Android and iPhone app to record their stats on the course or post round in the clubhouse and then using scoretracker functionality on Golfshake.com to identify strengths and weaknesses,” said Owen Davies. “At Golfshake we are passionate about improving golfers’ games and have invested substantially in expanding our video library of tuition content in the past couple of years. Golfshake members are now enjoying the benefits of this and watching videos to address weaknesses in their game.”

It is not only the tuition section that has seen an increase in video views, but also the equipment section, with video reviews of new golf equipment being consumed on a far larger scale than ever before.

The consumption in video signals a wider shift in user habits as technology, such as smartphones and internet speeds allows for a better user experience when it comes to video.

In a recent Golfshake survey of Golfshake members over 96% of 18 – 50 year olds owned a smartphone and it is on these devices that users are largely consuming video.   Video content viewed on Golfshake via smartphone or tablet accounted for 80% of the total views. This shift to smart phone usage is further evident in overall site traffic via mobile devices to Golfshake with mobile traffic increasing 8 times in the last 4 years.

Additionally, of the golfers surveyed over 75% had watched tuition videos online over the past 12 months suggesting that this form of learning and consuming content to aid their game improvement is growing ever popular.

The first of these updates arrives in the form of the Golfshake video hub providing consumers with a rich content platform for accessing the latest & best videos on their desktop, tablet or smartphone device.  The layout of Golfshake video hub has been designed specifically with video in mind and in particular enhances user experience when consumed on a tablet or mobile device.