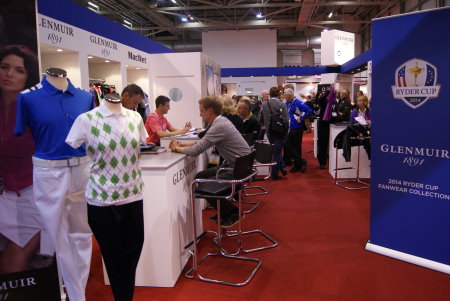 Glenmuir and Sunderland of Scotland enjoyed their most successful ever appearance at The Golf Show in Harrogate as the two famous brands showcased their new collections for 2013.

PGA Professionals flocked in large numbers to a superb 72 square metre stand, with the companies reporting a 28% year-on-year increase in customers placing orders and the value of orders taken rising by 77%.

Over three days, six professionals won signed Ryder Cup shirts as part of an exclusive promotion marking Glenmuir’s 25-year association with the prestigious sporting event. And Alistair Welsher of Reigate Heath GC won the prize draw for a luxury week’s holiday at the Aphrodite Hills golf resort in Cyprus, with flights from Aegean Airlines, which was entered by all customers placing orders over £1,000.

Glenmuir wearer and Ryder Cup hero Paul Lawrie was also on the stand with the trophy, won in spectacular fashion by the European Team in Medinah.

Said Glenmuir and Sunderland marketing director, Brian Mair: “We increased our presence at the show with the specific intention of showcasing the Spring/Summer 2013 collections for both brands and to make more PGA Professionals aware of Glenmuir’s proud 121-year Scottish golfing heritage and association with some of the greatest moments in golf.

“The collections were very well received by all customers who visited and we were particularly pleased by the reaction to the new Sunderland range, which is considered by many to be the best we’ve produced for some years.”