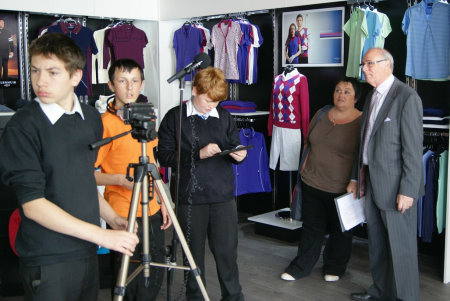 Pupils from a Perthshire school went behind the scenes at one of Europe’s largest golf clothing companies in the build up to The 2014 Ryder Cup at Gleneagles next year.

Lanark-based Glenmuir has been the preferred supplier of shirts and knitwear to the European Ryder Cup Team since 1987 and opened its doors to ‘Digital Ninjas’ from The Community School of Auchterarder, who were making a series of videos for a special educational project planned around the event.

The pupils were given unrestricted access to every part of the Glenmuir factory in Delves Road, which next year will be responsible for designing, manufacturing and embroidering clothes for some of the biggest names in the world of golf when they compete against the USA.

Their films have been posted on a special website, www.rydercupeducation.com, which has been created as part of a nationwide online educational resource to promote learning from the Ryder Cup throughout Scotland.

Said Colin Mee: “We were very impressed by the intensity and intelligence of the questions we were asked  – there is certainly a career in journalism awaiting some of the pupils.

“The impact the Ryder Cup will have on the entire Scottish economy next year will be huge and we tried to explain what being part of such a high-profile, global, event means for Glenmuir as a business and to our staff, who are all involved in the process of dressing the European Ryder Cup team to some extent.”

As part of the visit, the pupils were asked to officially open the new showroom at Glenmuir, which showcases the company’s seasonal collections.

Glenmuir is the preferred supplier of shirts and knitwear to the 2014 European Ryder Cup Team and is a brand at the forefront of the golfwear industry since 1891.