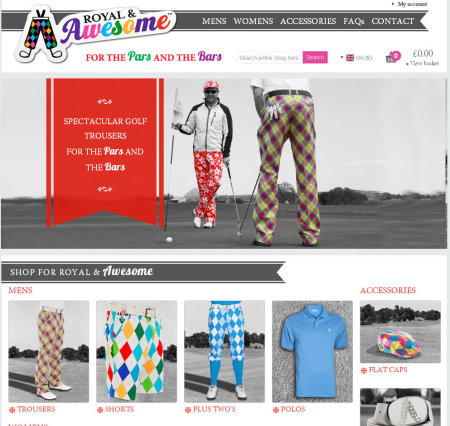 Royal & Awesome, the eye-catching Scottish golf clothing brand, is calling for all golfers to get their creative juices flowing and help design a new range of golf trousers, shorts and skorts to be launched in Spring 2014.

Famous for its dazzling designs, Royal & Awesome has decided to give the power to its fans by running a design competition through Facebook and Twitter. Fans can share images and ideas up until June 30 and designs will be shortlisted and developed in the autumn.

Entries have already been coming in thick and fast on its popular Facebook page and Royal & Awesome’s brand director, Graeme Smeaton, said: “We have been delighted by the flood of new ideas we have received from our 65,000 fans, since we announced our plans.

“We always want to put our consumers right at the heart of what we do and by running this competition, not only is it a bit of fun, but we are hoping to produce something that our fans will want to be seen in, on and off the fairways.”

Royal & Awesome’s range of eye-catching golf trousers, shorts and hats are ‘perfect for the pars and the bars’. The brand has recently launched plus-twos as well as women’s pants, shorts and skorts in their dazzling designs, complemented by a range of men’s and women’s shirts, socks and belts.