PING Professionals Finish One and Two 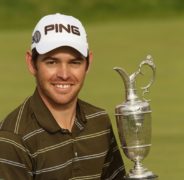 PING pro Louis Oosthuizen’s Open Championship win at St. Andrews came less than a month after switching to PING’s new S56 irons and Tour-S Rustique wedges, the company announced today. Both new clubs will be officially introduced on 28 July 2010 and will be available for golfers in mid-September.

“Winning a major championship with new clubs is the ultimate in product validation,” said John Solheim, PING Chairman & CEO. “We’re very proud of Louis exceptional play at St. Andrews. Not only did he dominate the scoreboard, but his statistics for the week were incomparable. From tee to green, his game was nearly flawless. To have him bring PING its third major championship in just over three years is very exciting for our company.”

Finishing in second place was PING pro Lee Westwood, who claimed his second runner-up finish this year in a major championship. He completed the four rounds at 9-under-par.

The 27-year-old Oosthuizen, a member of PING’s Worldwide staff since joining the European Tour, switched to the new clubs at the U.S. Open. He also used a PING Rapture V2 driver at St. Andrews to lead the field in driving accuracy and finish 4th in distance. Several commentators praised his driving for the week, calling it the “best ever in a major championship.” A specially-designed Redwood Anser putter with an extra long hosel helped him to a tie for third in putting for the week.

“I’m very thankful to be part of the PING Tour staff,” said Oosthuizen. “The new irons and wedges gave me the confidence to play some very difficult shots around St. Andrews. I was also able to drive my ball long and straight. My entire game was under control this week and I attribute a lot of that to my PING equipment.”

Oosthuizen was joined by several other players who put the new S56 irons and Tour-S wedges in the bag leading up to the third major of the year. For the week, there were five sets of S56 and 15 Tour-S wedges in play.