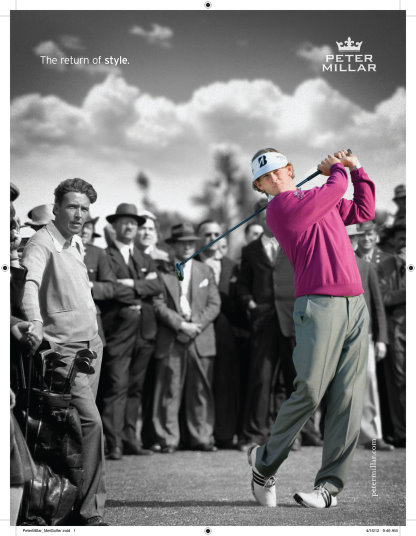 Peter Millar International has recently been appointed an official licensee of Ryder Cup Europe for the 2012 and 2014 matches.

Peter Millar will supply an “Exclusive” collection to Gleneagles and Paris National ahead of the forthcoming matches and the Peter Millar Ryder Cup collection can now be retailed in green grass pro shops and off course specialist retailers.

The Peter Millar Ryder Cup collection will also be available from www.rydercup.com

The much sought-after golf clothing brand, known and respected for using best in classic design and highest quality fabrics, is growing gradually throughout Europe at leading golf venues.

Peter Millar International Managing Director Bob Smith said: “We were delighted to be selected as an official licensee of Ryder Cup Europe. The Ryder Cup is an iconic event that creates interest throughout the world and for us at Peter Millar to be a partner shows how well respected our brand is. Hopefully this partnership will allow us to showcase the Peter Millar collection to some clubs that are not currently aware of what we have to offer.”

Peter Millar International launched in the UK & Ireland in 2005 and focused on the golf and resort market. You can now find the Peter Millar golf and lifestyle collection at Gleneagles, Loch Lomond, St Andrews, Wentworth, Sunningdale, Celtic Manor, Royal Lytham & St Annes, Ballybunion, Doonbeg and Old Head amongst many others. Peter Millar is also available at many private members clubs who have grown to appreciate the quality of the brand.

Founded in the United States in 2001, the Peter Millar line of fine clothing has become in just a few years that standard bearer for discerning and demanding individuals – on the golf course, in the office and on the town. Peter Millar is one of today’s fastest growing and most sought after brands in the lifestyle apparel market. The clothes and accessories are available in the finest speciality retail stores, prestigious resorts and exclusive golf clubs around the world.

“Peter Millar was selected to supply the team uniform (shirts, sweaters and trousers) for the 2010 US Ryder Cup Team and in 2011 we supplied team uniform and formal wear to the US Presidents Cup Team,” concludes Bob Smith.