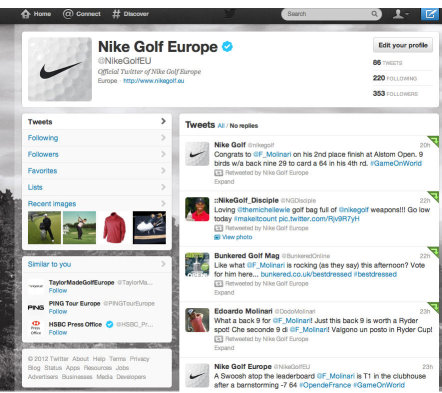 Nike Golf Europe has launched on Twitter with the handle @NikeGolfEU. The new site is dedicated to communicating directly with consumers from across the European Union and hopes to become a one stop shop for all things Nike Golf throughout Europe.

The global @nikegolf Twitter has gained more than 440,000 fans since its launch, more than double its nearest competitor, and has become an important part of the marketing mix for Nike Golf across the world.

@NikeGolfEU aims to offer fans behind the scenes insights of Nike’s athletes on the European Tour such as Paul Casey, Charl Schwartzel, Simon Dyson and Francesco Molinari, as well as the very latest product news and retail launch dates, sneak previews of new gear, competitions and much more.

Said Sean Jenner, marketing director Nike Golf EMEA: “We have been hugely successful with the global @nikegolf on Twitter but we felt that we could do more to communicate directly with our European consumers and make our news relevant for them, which is why we have launched @NikeGolfEU. We are hoping it will become an important source of information for the Nike Golf fan.”

Consumers who sign up to follow @NikeGolfEU from today will be in with a chance to win limited edition Open Championship Lunar Control shoes and a host of other great gear over the coming weeks.