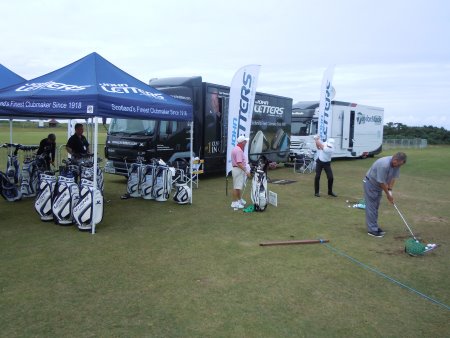 Following a hugely successful week at The 141st Open Championship, the new John Letters truck packed up and headed straight to Turnberry to support the European Senior Tour at The Senior Open.

The famous Scottish Clubmaker has been a big supporter of the European Senior Tour over recent years and 2012 is no exception. As one of only four manufacturers to support the European Senior’s Tour at the Major Championship, Letters’ efforts did not go unnoticed; particularly as the only tour support truck to stay the duration of the week and not just the practice days. The Letters team did not stop all week as they repaired, re-gripped and checked all the players’ equipment in addition to kitting out many of the field with the latest John Letters products.

The new Letters tour truck had a commanding position on the practice ground and built on the relationships they have fostered with the Senior players to complete their most successful week on tour with close to 100 John Letters products in play during the British Major.

Benahavis Senior Masters Champion, Paul Wesselingh, who is currently third placed on the order of Merit, was fitted for a set of Master Model Satin irons as well as set of tour black wedges (52°, 56° and 60°) and put them in play for his fourth round.

South African Wayne Westerner was also fitted for a set of Master Model irons, this time in the Black PVD finish and Joe Rivero, Costintino Rocca and Japanese number one JD each used Letters’ highly-coveted Tour black wedges. Meanwhile, Angel Fernandez opted for the new MM Grind wedges in 52° and 56° and both Juan Quiros and Andrew Oldcorn put the new John Letters Master Model driver into play. Featuring a Beta Titanium plasma welded face – it is explosive and provides the added distance the Senior professionals are looking for.

Long-term advocates of the Letters products, Andrew Sherbourne and Steve Cipa retained pretty much the full complement of JL products in their bags, while Angel Franco put a full-set of Master Model irons into play on Friday and explained: “The clubs performed fantastic and I got backspin on my iron shots which enabled me to confidently hit into the greens. Thank you John Letters for my new master model irons.”

The most popular items during the week were the new Master Model driver, the Tour Black wedges and the famous Master Model irons which have reportedly won over 13 Open Championships.

John Letters’ Managing Director John Andrew, commented: “The feedback we get from the Senior tour players is unbelievable. They are truly appreciative of our efforts to support the tour and it gives me great pleasure to see our clubs getting used by such legends of the game.”

Letters continued their support of the PGA Professionals in the field including Wesselingh, Cipa and qualifier Phil Hinton, who turned to Letters after learning his existing clubs were non-conforming and was fitted for a full-set of Master model irons and woods. Hinton comfortably made the cut and went on to be paired with Tom Watson and secure the biggest cheque of his European Senior Tour career.